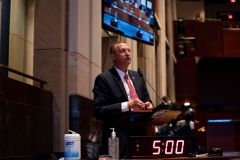 (CNSNews.com) - Former Rep. Doug Collins (R-Ga.) said Monday that the election of Congresswoman-elect Mayra Flores (R-Texas) illustrates that black and Latino voters are turning out in larger numbers for the Republican Party, because they’re tired of the empty promises.

“I think the interesting part here is– and the mainstream media for the most part ignores this, but over the last few election cycles I've been watching this. Hispanic voters and African-American voters have been turning to larger numbers to the Republican Party simply because of what the congresswoman-elect just said, they are tired of promises with nothing going on,” he told Fox Business’ “Mornings with Maria Bartiromo.”

“This is one of the reasons why the press never understood Donald Trump's appeal to African-American voters and others is because he actually tried to help with things like empowerment zones, opportunity zones, these things that actually went into the neighborhoods and said let's fix this,” Collins said.

“He made a great comment one time. He said, what’s the difference? He said you've not gotten any help in 50 years, why not try something different? And her sentiment right there was perfect in the sense that Hispanic voters have always been conservative people of faith, but they've also been taken for granted as a reliable vote for the Democrats,” the former congressman said.

When asked what the single defining issue is moving forward to the midterm elections.

“To take an old line from an old Democratic campaign operative, it's the economy, stupid. It's all it's going to be about. We've got to face it,” Collins said.