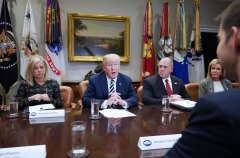 President Donald Trump speaks during a round table discussion with law enforcement officials on sanctuary cities in the Roosevelt Room of the White House on March 20, 2018. Flanking Trump are Homeland Security Secretary Kirstjen Nielsen (L) and US Immigration and Customs Enforcement Acting Director Thomas Homan. (Photo by MANDEL NGAN/AFP via Getty Images)

(CNSNews.com) - Former acting ICE Director Tom Homan said Friday that the number of migrants who died on U.S. soil hit a record under President Biden, because of the president’s immigration policies.

On Monday, 53 migrants died in San Antonio, Texas, in what is considered to be the deadliest human smuggling incident in U.S. history.

Homan told Fox Business’s “Morning with Maria Bartiromo” that there will be “more tragic incidents” similar to that one.

I’ve said it for a year. There's going to be more tragic incidents. I was the lead investigator on a tractor trailer incident back in 2003. We had 19 dead, and it changed me forever, standing in the back of a tractor trailer with 19 dead bodies at your feet, including a 5-year-old little boy. That changed me forever. We’re going to see more deaths.

Here’s what people aren't talking about, and I'm glad that you brought it up. Under President Biden, we've had over 700 migrant deaths on U.S. Soil. That's a record, and if you add that 53 from the other day, it makes it worse.

Their policies are not humane, because when you open the border up, when you say, ‘you’re not going to be detained. We’re going to release you,’ and you start talking about amnesty and you shut down ICE detention, and you promise them free health care, when you open the border up and have all those offers, that they’re not going to be detained and they’re going to be released, and even if they get ordered removed – I just gave you the stats – even if you get ordered removed, you’re not going to leave because ICE isn’t looking for you, when those decisions are out there, the cartels use it.

Where do they use it? They use it to bring the most vulnerable people to our border. These policies convince the most vulnerable people in the world to put themselves in the arms of the criminal cartels who don't care about them and so more deaths are going to occur. Record amount of migrant deaths under Joe Biden, so you tell me how these policies are humane. I worked with President Trump.

How many children aren't dying? How many migrants aren't dying. How many U.S. citizens aren't dying from drug overdoses? Securing the border saves lives, and that’s just a stone cold fact, and this administration does not want to secure the border. It means more death.

Homan disagrees with the Supreme Court decision this week that allows the Biden administration to end the Remain in Mexico program, which required migrants to apply for asylum in the United States while waiting in Mexico for their case to be decided.

He said even though he disagrees, he won’t do what liberal Democrats have done, which is call for court packing or demonstrating outside the justices’ homes.

First of all, I don’t agree with the ruling, but I’m not going to demand that we pack the court or go up there and protest at their homes. We’ve got to live with it, but I think it's a bad ruling because it's going the cause an increase in border encounters.

I mean those that have been returned under the Remain in Mexico that claim asylum are now going to be allowed in the U.S. if the Department of Homeland Security does it. Now the Supreme Court said they can end it, but they didn’t say they had to end it. They said they had the authority to end it, and this is going to be clear to the American people.

If they end this program, then that's another piece of evidence that they don't want to secure the border. They know this is going to cause-- the secretary’s on tape saying this will cause a bigger surge. Let's see if they actually do it, and the reason-- look, people need to understand. The reason President Trump put that program in place - Remain in Mexico - is there's two data points that people need to understand.

If you look at immigration court data, nearly 9 out of 10 Central Americans who claim asylum at the border never get relief from the U.S. courts, because they either don't show up or they don't qualify. Nine out of ten don't make it. What happens to that nine out of ten?

According to the Homeland Security Lifecycle report, the secretary's report, if you're UAC, an unaccompanied child, you leave 3% of the time, a family member, families leave 6% of the time, single adults leave 20% of the time. President Trump got it.

He said, look, 90% don't qualify when we release them in the United States, and only 3 to 6% leave when ordered, why the hell are we doing this? This program makes sense, and we’ll see what the secretary does. If he does it, further evidence they want open borders.

Homan said that although there will be an increase in migrants crossing the southern border and claiming asylum, there won’t be an “explosion,” because the Biden administration wasn’t even enforcing the Remain in Mexico policy anyway.

We’re going to see an increase, but it’s not going to be an explosion, because they haven't run this program properly anyways. Even the Title 42, they only return like 40% of what they could return, but here’s the danger of this decision. More people will cross the border and add to the already historic encounters on the border. What's that going to mean?

What’s that mean? More fentanyl is going to come across the border and get away. We’re gonna have a lot more gotaways. We don't know who they are, which is going to be a national security threat if they’re known suspected terrorists.

This is going to be devastating to not just illegal immigration but to our national security and to those who come into the country to do us harm - criminals and gang members – more of them are going to get by and get away because more Border Patrol agents are taken off the line because of this decision.