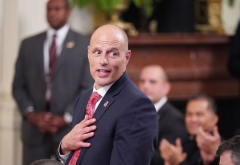 (CNSNews.com) – Former Acting ICE Director Ronald Vitiello on Wednesday urged local politicians to urge the Biden administration to reverse their rescission of the border policies that were working during the Trump administration.

“It's terrible. We've gone in less than a year, we've gone from a modicum of border security, historic low rates of activity. We were building a wall. We were adding resources, and now we're in a situation less than a year later where we've seen historic highs in apprehensions,” he told Fox Business’ “Mornings with Maria Bartiromo.”

“Last fiscal year, 1.7 million encounters at CBP, and places like Yuma, like Rio Grande Valley, Del Rio, Texas, those communities are not equipped for this kind of activity, this kind of -- where people come in large numbers with families and children coming alone and then they’re effectively released into those communities and in a place like Yuma they're not equipped to deal with that,” Vitiello said.

“So I think what they need to do is they need to advocate for their own citizens to get this administration to reverse their rescission of these policies that were working under the prior administration,” the former Border Patrol commissioner said.

The policies that existed prior to January 20th, '21 was if you came to the border and claimed asylum, you had to wait in Mexico for your hearing, and what that did is that brought the activity level down to only the people who were most in need of coming to the United States.

The framework for asylum and immigration at the border has been a problem for quite a long time, but the Migrant Protection Protocols, allowing people to have their due process but waiting in Mexico brought the levels of activity down and when you bring that activity down, that gives the Border Patrol more opportunity to find people who are human trafficked and rescue them, to seize more narcotics, to patrol that border and a keep us safe.

When you encourage the kind of activity that we're seeing now, we've never seen anything like it. It’s busier than it's ever been in the history of the border. When you have that, you have more chaos. The cartels are in charge. More people are being exploited, and more people are being trafficked.

We have to find a way to bring the levels of activity down, and the way you do that is you hold people in detention until they have their due process, or you let them wait in Mexico, which was happening under the last administration.

Vitiello said that the flood of migrants at the border also gives cover for cartels to smuggle in record amounts of fentanyl.

What they've done is they've encouraged people to bring their children to the border or if you're coming to the united States now is the time to come. When they rescinded these policies, basically they flooded the border with this crush of humanity.

What that does, that gives the cartels cover to smuggle this poison into the United States, and that's encouraged other people to come and so you have this signal that's been sent out, come to the border now, and the Border Patrol obviously is overwhelmed.

ICE Is overwhelmed, and then the rhetoric around what's going on in the United States and the policy statements that this administration has made in the interior what that says if you're here illegally ICE is not going to come and try to find you, if you're not a threat to public safety or convicted felon, ICE isn't looking for you, if you're an unscrupulous employer we’re not going to send ICE agents to your business.

What we've done, we've encouraged this flow and until they bring the flow down, everybody is at risk, people who live on the border, people who are in the interior and even people in the pipeline who have been encouraged to come to the border right now.