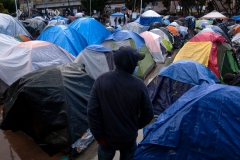 A migrant walks amid tents at an improvised camp outside El Chaparral crossing port as he and others wait for US authorities to allow them to start their migration process in Tijuana, Baja California state, Mexico, on March 11, 2021. (Photo by GUILLERMO ARIAS/AFP via Getty Images)

(CNSNews.com) – If what’s going on at the U.S.-Mexico border right now isn’t considered a crisis, then it wasn’t a crisis in 2014 when then-DHS Secretary Jeh Johnson and then-President Barack Obama called it a humanitarian crisis, former acting ICE Director Ron Vitiello said Friday.

“Well if they don't call it a crisis, then why did they send an Emergency Management Association from the department? Why is FEMA going down to the border to help CBP with the thousands and thousands of people that are coming across the border every night? Over 3,000 children in custody at HHS,” he told Fox Business’s “Mornings with Maria Bartiromo” on Friday.

“If this isn't a crisis, then it wasn't a crisis in 2018 when we were overwhelmed, when I was still in government, when we had 9,000 people in custody. It wasn't a crisis in 2014, when Jeh Johnson and Barack Obama called it a humanitarian crisis. What's happening now is worse than both of those two periods, and I don't see an end in sight,” said Vitiello, who worked for the Trump administration.

“I'm clear on the idea they were going to change the policies, but not having the shelter space available, not having adequate facilities augmented at the border, is-- it's ridiculous. They blew up the border basically. We had a fix for these kinds of surges that we started in 2018 through 2019, and they took all of the tools that made that make made that work off the table,” Vitiello said.

“In a nationally televised address from the White House, the president warned about an ‘actual humanitarian crisis on the border’ prompted by a surge of migrants from Central America, and urged Congress to take action on his immigration agenda. The year was 2014, and the president was Barack Obama,” NPR reported on Jan. 9, 2019.

“What's the point of this, to make the country less safe?” she asked.

“It's hard for me to understand, because the people who were advising this president knew exactly what would happen when they removed these tools out of the toolset - having an agreement with Mexico, an historic agreement with Mexico for them to patrol and control their own southern border, help us on the northern border and allow migrants who wanted to make an asylum claim to remain in Mexico throughout the duration of that hearing,” Vitiello said.

“That’s-- it's historic, unprecedented support from Mexico. I spent 33 years in the Border Patrol – many hours, many days - working with colleagues in Mexico for them to do more as it relates to this pipeline. We had that cooperation with them, and now it's gone,” he said.

As for what the administration and immigration officials can do now to stop the crisis, Vitiello said, “Well, what worked before was this Remain in Mexico policy - the Migrant Protection Protocols - and the asylum accords with the Northern Triangle - Honduras, Guatemala, El Salvador – allow people to make claims for asylum, but let them remain in Mexico, and what that did is that effectively told the planet or the region, don't get in the pipeline because they're not going to let you in at the border. So you have to put a condition in place.

“In 2014 when we stopped the surge. We added family detention centers, and that abated the flow at the border. The same thing happened in 2006. We figured out how to use the detention we had, added detention capacity so that people could come and make claims, but they stayed in custody until those claims were fully realized. Now people are being allowed to come in the United States,” he said.

Vitiello said that the pull of more migrants at the border “appears to be inevitable,” because the Biden administration looks like “they’re not going to change or go back to” the Remain in Mexico policy or the Safe Third Country Agreement.

“You could set up a scenario where there's a sufficient shelter space, a sufficient detention, like if you want to let these people come in and put them in detention, that would deter many more from coming, but obviously they're not of a mind to do that because they -- they made a statement on the 21st about how they're going to restrict immigration enforcement,” he said.