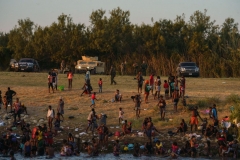 Haitian migrants are pictured on the banks of the Rio Grande in Del Rio, Texas, as seen from Ciudad Acuna, Coahuila state, Mexico on September 20, 2021. (Photo by PAUL RATJE/AFP via Getty Images)

(CNSNews.com) - Former acting ICE Director Tom Homan said Thursday that the Border Patrol agent accused of whipping Haitian migrants at the border in Del Rio, Texas, “did not whip anybody” and was spinning the horse’s reins to keep people away from the agent and his horse to protect himself.

That’s what he was trained to do, just as New York City police on horseback do crowd control, Homan told Fox News’s “America’s Newsroom.”

They’re trying to change the narrative. Now they’re attacking a Border Patrol agent on horseback. That horse did what the horse was trained to do. The officer did exactly what he was trained to do the same way horse patrol in New York City does crowd control.

This agent has now been put on the beach looking at losing his job because the Democrats are saying he’s whipping a black man. He didn't whip anybody. He had reins on the horse that you spin to keep people away from him and the horse to protect himself.

Another picture they say the agent had his hands on somebody on horseback. Well shame on that agent for doing his job. His job is to arrest people that enter this country illegally. This agent did nothing wrong, and I'm sick and tired of these politicians whether it’s the secretary, vice president, Jen Psaki or these members of Congress that want to say this is a racial thing.

Homan expressed concerns that the investigation will be biased, because the inspector general who is conducting it answers to DHS Secretary Alejandro Mayorkas, who has said he’s insulted by the video of the encounters in question.

If they do a fair investigation the horse agents did exactly what they were trained to do. What really concerns me is the secretary comes out after he says what needs to be investigated when he’s on camera in Del Rio. Then he gets on the networks like NBC and CNN how insulted he is by this video and how this video was very concerning.

The inspector general who’s going to investigate this officer works for the secretary of homeland security. So I think the water’s already been muddied. Is the special IG going to go against what the secretary said? This is unfair to this agent, and that’s why morale is so low.

I'm upset. I wore that uniform. I’ve done the job. These are patriots. They shouldn't be vilified by Congress. They’re trying to change the narrative, and plus, they were put in that position with these Haitians because of the Biden administration border policies.

It's insulting to the men and women who wear that uniform, and my heart goes out to them. They're already overworked, overburdened. They’re sick. They’re going home sick. They’re taking diseases home to their families and they’ve saved so many thousands of people, and no one wants to talk about that.

Homan also accused the DHS secretary of lying about not having enough time to look up the numbers on how many Haitian migrants have been released into the country and how many have been sent back to Haiti, because as acting ICE director, all Homan had to do was make a phone call, and he could find out that type of information in 15 minutes.

They absolutely know the numbers. He’s not going to pull the numbers. Look, I was the ICE director. We spent millions of dollars on these databases. As ICE director, all I had to do was make a phone call and say how many people have we removed since January, and I’d have the answer in 15 minutes because the database will spill the information out.

They're going to tell ICE slowroll the release of the Haitians right now because we're under a microscope, so slow roll the release. I’ve been there. That's what they're gonna do, but ICE has those numbers - how many they’ve released. Border Patrol knows how many they’ve released. It’s a matter of pulling the numbers out of the database and a few clicks on a keyboard.