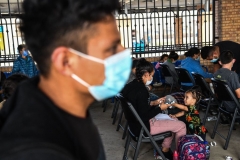 A migrant girl from Central America waits with her mother for a bus after they are dropped off by the US Customs and Border Protection at a bus station near the Gateway International Bridge, between the cities of Brownsville, Texas, and Matamoros, Mexico, on March 15, 2021 in Brownsville, Texas. (Photo by CHANDAN KHANNA/AFP via Getty Images)

Homan told “Fox News Primetime” that he used to have to look kids in their faces when they’ve crossed the border, and that’s why he gets so emotional when talking about the subject.

“And that's why a lot of people ask me why do you get so emotional on some of your interviews? Why do you yell at Congress? Because if people saw what I saw in my 34-year career, they’d be angry, too, because I’ve held dying children. I’ve held a dying child that suffocated to death in the back of a tractor-trailer in his father's arms. I found dead women. I’ve talked to women who were raped over 20 times making that journey,” he said.

“And what the Biden administration is doing is, as you said, giving a green light to sex traffickers, child traffickers that's you’re back in business. It's not compassion to put your children in the arms of criminal cartels. They don't care about these people. They’re nothing but a product, but once they get to their final destination, they get paid for them. During Operation Ice Storm in Phoenix, Arizona, if an alien couldn't pay the smuggling fees, they torture them. They kill them,” Homan said.

“I was there. I ran that operation. One person couldn't pay a smuggler's fee was stabbed in the face over 20 times. That's how he died. So for this administration to say they’re acting compassionately, no. You are empowering the criminal cartels to smuggle the most vulnerable people in dangerous situations. People are going to die. Women are going to be sexually assaulted. There is no compassion in this plan at all,” he added.

On the question of transparency, Homan said that the Biden administration can’t compare to the Trump administration. He said the White House saying that it will send out footage of the conditions at the border is “not transparency at all.”

“You can say what you want about President Trump. They hated him, but President Trump was down on the border all the time talking to the men and women. We let cameras in our detention facilities. We wanted the reporters there to show them, look, we have a serious crisis, humanitarian issue that we are dealing with,” Homan said.

“The Biden administration, first of all, the secretary gets on ‘Fox News Sunday’ and lies to the American people and say the border is closed and is secure. It is far from closed and secure. So they are hiding the truth from the American people in this, because there isn’t an accident. This isn't a mistake. They planned this. This is by design. This is what open borders looks like,” he said.

Fox News host Brian Kilmeade pointed out that President Joe Biden and DHS Secretary Alejandro Mayorkas dealt with the issue when they were vice president and deputy homeland security secretary respectively, and they know how to fix the crisis at the border. In fact, Homan worked with Biden and Mayorkas to fix it.

“And how did we fix it? We built thousands of detention beds. We held people to see a judge, and 90 percent of them lost their case. And guess what? ICE removed them, and what happened when they saw the people coming home? The border numbers went down, and we removed the enticements,” Homan said.

“What's this administration doing? And they know better. Like you said, Ali Mayorkas was there, and so was Joe Biden. They are ending detention. They want to get these people out as quickly as possible - less than three days. ICE has been decapitated,” the former acting ICE director said.

“They can no longer execute removal orders from judges, and you just keep adding more and more enticements like … saying we’re going to put you in hotel rooms at $86 million at the same time we have homeless vets in the streets of Washington, D.C., would love to be in hotel rooms to take a hot shower but we are going to take care of those and keep enticing more illegal aliens across that border,” he said.

Homan predicted that the situation at the border will only get worse, especially when the Biden administration gets rid of Title 42 of the United States Code Section 265, enacted on March 21, 2020 during the Trump administration, which relies on a 1944 public health statute to indefinitely close the border to non-essential travel because of COVID.

“When they tie the Border Patrol up with these family groups, 50 percent of the Border Patrol is no longer on the line, and the cartels send it through one sector. That's when they move the drugs and bad guys through. This is a national security issue not just a humanitarian issue,” Homan added.