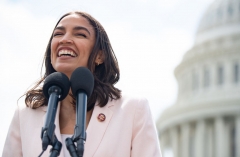 Representative Alexandria Ocasio-Cortez, Democrat of New York, attends a press conference about a postal banking pilot program outside the US Capitol in Washington, DC, April 15, 2021. (Photo by SAUL LOEB/AFP via Getty Images)

(CNSNews.com) - Rep. Alexandria Ocasio-Cortez (D-N.Y.) is selling “Abolish ICE” t-shirts in her online store, and former acting ICE Director Tom Homan said Monday that she’s proving “once again” that “she’s the least smart congresswoman in the history” of Congress, because she has no clue what ICE does.

“She once again proves she's the least smart congresswoman in the history of the United States Congress. If you ask AOC, what does ICE do? Can you give us five things ICE does? She wouldn't be able to answer the question. Does she realize ICE saves thousands of women from human trafficking, thousands of children from child predators? They seized enough of fentanyl this year to kill every man, woman and child in the country twice over,” Homan told Fox Business’s “Mornings with Maria Bartiromo.”

“She ought to be thanking ICE for keeping her district safe and New York safe and this country safer by all the things I just said, but she doesn't understand what ICE does. She just thinks they are just an immigration agency. They’re a lot bigger and do a lot more important national security work for this nation,” Homan said.

He pointed out that “Afghanistan released thousands of terrorists from prison whose sole goal is to destroy this nation.”

“The south border is wide open. Border Patrol actually arrested 16 people last year, 16 people on the FBI screening database. These are people that don't want to be arrested so these 16 people obviously weren’t very smart. They got arrested, but I just said half a million got aways, and that's just not a guess. That's based on camera traffic, drone traffic, sensor traffic that Border Patrol responded to,” the former acting ICE director said.

“There’s pictures of this - half a million got aways. How many of that are known as suspected terrorists? How many of them come to this country to do us harm? That is the most important thing about this crisis that people need to understand. It's just not an immigration crisis. It’s just not a humanitarian crisis,” Homan said.

“It's a public safety crisis beca of criminals, a public health crisis because of COVID and it's certainly a national security crisis. We should be concerned about this, but this administration again has turned their back on law enforcement on the border. There’s no system or consequence. There’s no system of deterrence on the southern border,” he said.

Despite 153,941 migrant encounters on the southwest border in January, almost double the number they had at the same time last year, Homan doesn’t think the Biden administration will do anything about it.

“The last year was historic. The highest illegal immigration numbers in the history of the nation, I mean, they went from the most secure border I've seen in my career from President Trump to historic immigration again, not by accident or mismanagement, it wasn't incompetent, this is what Joe Biden ran on is open borders, and they are not apologetic,” he said.

“You don't see them having press conferences talking about what we got to do to slow the flow. You saw the videotapes of townhall meetings of Border Patrol agents, The secretary and chief got an argument with border agents because why? Because they don't offer any strategy. They don't offer any idea of how to slow the flow, so there’s enormous numbers coming across the border,” Homan added.

He said that Border Patrol has arrested nationals from over 150 different countries.

“That just proves that the whole world knows the border is open, the whole world sees what's going on at our southern border. The criminal cartels are taking advantage of the fact that this administration has released over half a million people into this country in one year - released them,” the former acting director said.

“That’s not counting the half a million got a ways, people that got by the Border Patrol, so the whole world knows that if you get to the United States and can cross the border chances are you get to stay and also even if you lose your immigration case - this is what cartels are selling right now - even if you lose your immigration case, guess what?” Homan said.

“ICE can't remove you because the secretary has said being in the country illegally on its own is not enough reason for ICE to make an arrest, so they don't. You get in the United States, and you are home free even if you lose your case,” he said.