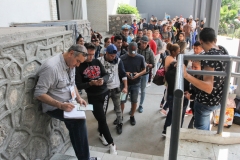 Cuban asylum seekers queue for a turn for an asylum appointment with US authorities in Ciudad Juarez, Chihuahua state, Mexico, on May 31, 2019. (Photo by HERIKA MARTINEZ/AFP via Getty Images)

(CNSNews.com) – The Biden administration’s goal is to allow illegal immigrants to game the system, by making fraudulent asylum claims, waiting in the U.S. for an immigration hearing 12 months from now, and later the administration will advocate for them to get amnesty, former acting DHS Secretary Chad Wolf said Wednesday.

“The Remain in Mexico program, or MPP as we called it, helped the situation at the border in that it was designed to root out fraud in the asylum system, and so the idea was to speed up the process so that you could go through and get your immigration hearing before a judge in a matter of months. They've taken that away,” he told Fox Business’s “Mornings with Maria Bartiromo.”

“So what it will do is revert back to what it was doing four years ago, which is you come into the country, and you'll likely not get a hearing before an immigration judge until 12 months or more, and through that time you'll be able to work, you'll be able to do other things here in the U.S., and we know that the vast majority of these folks don't qualify for asylum and/or they don't show up for their court cases, so they remain in the United States over a course of a number of years, and so the Biden administration knows this,” the former acting secretary said.

“They have the facts. They have the data. The Department of Homeland Security provides that data to them, so my guess is their goal is that these individuals stay here over a period of time at which point as they are doing now, they will advocate for amnesty for these individuals,” Wolf added.
The vast majority of unaccompanied minors crossing the U.S.-Mexico border are 16 and 17 years old, Wolf said.

“I would say the vast majority of minors are not your eight- or your five-year-old. They’re between 16 and 17 years of age. We saw the vast majority of them, and those are working-age adults in Central America. We also know that almost everyone that comes across that border isolated, illegally comes across the border has to pay a smuggler, trafficker or of cartel member to come across the border so it becomes dangerous, very expensive to do that,” he said.

“They're only taking these risks again, because the Biden administration signaled that it's okay to do that, because your odds are in your favor that you will remain here in the United States. Once they understand that your odds are not good to stay here because you have no legal right to stay here, you will see that number diminish and drop as it did during the Trump administration, but as of right now they are giving no signal to that, and there is no end in sight for this crisis,” Wolf said.

“We have to remember, we're just in the month of February or March now. March, April, May, June are the high traffic months as far as illegal border crossings,” the former acting DHS secretary said.

The Biden administration refuses to call the uptick in illegal immigrants crossing the border a crisis, and Wolf said, “This is not about labeling what's going on down there.”

“This is about being honest with the American people. There is clearly a crisis at the border. The Biden administration needs to take ownership of that. They need to stop ignoring that. They need to start doing and taking concrete steps to address the surge of migrants coming across the southwest border,” he said.

While Wolf served as acting DHS secretary for the Trump administration, they sent “the signal that it's not okay, that you're not going to get a free pass by coming across the border and staying in the United States, whether that's MPP, that’s some of the international agreements that have been canceled and there’s a variety of other enforcement-related measures that can be taken.”

“The Biden administration however, has chosen time and time again to take those tools off the table, and the only thing that they have replaced it with is the catch and release. There are thousands and thousands of family units, single adults and others that are being released into American communities every single day and as we know from some reporting, there is COVID positive cases in that population,” he said.

Host Maria Bartiromo pointed out that the Biden administration is calling the migrant processing centers “reception centers” in an effort to make the name less harsh.

“Well, these are residential centers that ICE currently operates. They operate three of them. I've heard they talked about renaming them reception centers, and all that is, is a way to faster -- to process individuals into the country in a faster rate. So instead of having them detained at the detention facility for a period of time, they're just going to process them in a matter of hours and release them into the country,” Wolf said.

He said the Biden administration is not being honest with the American people, because they won’t call it a “crisis.”

“And I think as you indicated, I think the Biden administration needs to be honest with the American people, needs to lay out what their ultimate desire and goal is,” the former acting secretary said.

Bartiromo said that local congressmen are telling Border Patrol agents not to carry their “long-arm guns” when they go up the bridges to Mexico, because they don’t want them scaring migrants away despite the fact that it may hamper them from protecting the border from drug cartels.
Wolf said that Customs and Border Patrol officers are therefore put in a vulnerable position.

“I would say this is the worst case scenario for our men and women in border patrol, the men and women in green uniform. They are having to process untold numbers of individuals every day, large groups of individuals having to care for them and process them and not do their national security mission on the border, protecting as you indicated from cartels and smugglers, traffickers and all the violence that we see along that border. That is their job to secure this country,” Wolf said.

“Instead, because of the actions of this administration, they're now having to care for thousands and thousands of individuals every single day that are crossing that border illegally and many of them, Maria, are not trying to run from the Border Patrol. They will cross that border,” he said.

“If you know that as you get apprehended by Border Patrol, you'll be processed. You'll be given to a reception center where you'll be fed and then you'll be released into the country, probably with a bus ticket or plane ticket. Why would you not want to do that?” Wolf said.
“That's exactly the incentives and the pull factors that I have been talking about that's going to just encourage more and more illegal migration into the U.S. There is no end in sight because the process that they are putting together is just going to continue to incentivize this type of behavior,” he said.