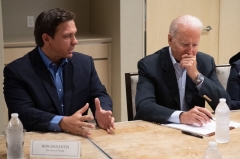 (CNSNews.com) – Florida Gov. Ron DeSantis said Sunday that he is offering law enforcement from states that have vaccine mandates a $5,000 bonus to move to Florida.

When asked what he’s doing to push back on President Joe Biden’s vaccine mandate, DeSantis said, “Well, fortunately, we've been able to fight back very effectively against mandates imposed by, for example, local governments against police and fire.

“Maria, these people we've been hailing as heroes, the nurses we've said have been heroes, this whole time they've been working day in and day out. They couldn't do their job on Zoom. They had to be there, and they did it, and they did it with honor and integrity,” he told Fox News’ “Sunday Morning Futures.”

“Now you have people that want to kick them out of their job over the shot, which is basically a personal decision, and you're right, what Biden's doing is unconstitutional,” the governor said.

“He does not have the authority to do this, but what it will do on a practical level in addition to being unconstitutional, and in addition to taking away people's personal choices, is it will wreak havoc in the economy, because even if a small percentage of these folks end up losing their jobs or voluntarily walking away, you're going to have huge disruptions in medical, in logistics, in law enforcement, and so in Florida, our policy is very clear,” he said.

“We're going to have a special session, and we're going to say nobody should lose their job based off these injections. It's a choice you can make, but we want to make sure we're protecting your jobs and your livelihood,” DeSantis said.

Host Maria Bartiromo asked if President Joe Biden is pushing for the vaccine mandate to be implemented before it is ruled unconstitutional during any legal challenges.

“Well, first, I think it's important to point out on a scientific basis, most of the first responders have had COVID and have recovered so they have strong protection, and so I think that influences their decision on a lot of this that they've had it and recovered. So they're making no accommodations for that. They're still pretending like that doesn't even exist,” DeSantis said.

“So NYPD, Minneapolis, Seattle, if you're not being treated well, we'll treat you better here. You can fill important needs for us, and we'll compensate you as a result,” the governor said.