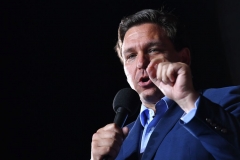 Florida Governor Ron DeSantis gestures as he speaks during a campaign rally for the US president at Pensacola International Airport in Pensacola, Florida on October 23, 2020. (Photo by MANDEL NGAN/AFP via Getty Images)

(CNSNews.com) - Florida Gov. Ron DeSantis said Wednesday that he will hold a special session in the Florida legislature next week to ban vaccine mandates for school children and workers.

“As you said Sean, we are leading the fight for freedom in this country. We will have a special session next week. We’re gonna do a number of things. One, no Floridian can be fired over the jabs. We want people to be able to keep their jobs and not be thrown out of work. We are providing protection. We’re also going to ban any type of mandates for vaccines for school children,” he told Fox News’ “Hannity.”

“That's a parent's decision. That is not something that is going to be forced on children, and then of course we are fighting against Biden's unconstitutional OSHA rule? We’re in court in the 11th Circuit. The 5th circuit’s already ruled. I think the 11th’s going to be positive as well, and so we’re fighting him on all fronts,” DeSantis said.

The governor also set up monoclonal antibody centers throughout his state to protect the elderly who contract COVID-19, but President Joe Biden rationed the antibodies even though there is no shortage of it, so the governor has to use Florida tax dollars to get it, and he accused Biden of playing politics.

“I think it's just pure politics. I think he obviously likes to attack Florida, and part of it is, people in his administration have not really talked about this at all. I think they think if people know there is a treatment, it may mean some people won't get vaccines, but as we know, Sean, the majority of the people getting these treatments in Florida are vaccinated,” DeSantis said.

“These are folks that have been vaccinated and then still get infected, and of course, this disproportionately affects elderly people in Florida. So having this treatment is absolutely the right thing to do. I hope that the northern states as we see it rise in the north now and probably will throughout the winter, I hope that they will use it. It's not political,” he said.

“People attacked me for doing it just because we live in a partisan age. I go out in Florida. Someone comes up to me every time saying they took it, and it resolved them, and they would have gone to the hospital and maybe died had they not done it,” the governor said.

On immigration, DeSantis said that he’s looking at ways to protect his state from the Biden administration’s decision to send illegal immigrants to his state.

“Well, there’s a couple of issues. One is the courts have traditionally said immigration is a federal responsibility, that states can't really undercut the feds. I don't know whether that’s right or wrong, but I know this. If it's a federal responsibility what happens when the federal government totally defaults on that responsibility? Are they saying the states have no ability to protect themselves?” he said.

“So we’re gonna try to challenge some of those I think older understandings. We are also working to see how we can deal with these folks. They don't tell us when flights are coming in. These are flights at 2 in the morning,” the governor said.

“There was a tragic situation. One of the illegals that Biden flew in committed a murder in Florida. That individual who died would be alive, if Biden had not been doing this. So this is really serious stuff. We are looking at ways to protect the state,” DeSantis said.

“We are looking at ways to hold these contractors accountable who are basically the instruments of what Biden's lawlessness is bringing to say look you have a choice. You want to abet the lawlessness, then you’re not going to be able to have privileges in the state of Florida, so we are looking at every single option, and we’re gonna definitely be-- you’ll see, you’ll hear some news from us over the next few weeks,” he said.

DeSantis said not only will his state provide “substantive protection for every worker in Florida” in the public and private sector, he’s also strengthening parents’ rights.

“In terms of parents rights, we’re really doing two things. One is, we’re strengthening the prohibition on forcing COVID vaccines on school children. School districts can’t do that. Government can’t do that. That's a parent's decision, and then we’re also clarifying - and I've been winning these court cases - that masking school children is a parent's decision. It can't be forced. That's what most of Florida is doing anyway. This will make it 100%,” he said.