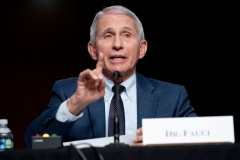 (CNSNews.com) - Dr. Anthony Fauci, director of the National Institute of Allergy and Infectious Diseases, said Sunday that the long-term strategy in dealing with COVID surges is that we hope to get COVID-19 down to such a low level that it becomes “integrated into the general respiratory infections that we have learned to live with.”

“Well, the long-term strategy, we hope, Martha ,is that we will get to the point, particularly now with the turnaround of Omicron, which fundamentally looks like it is, on a case-by-case basis, less virulent, in the sense of causing severe disease -- it's by no means exempt from making people sick and putting them into the hospital, particularly those who are not vaccinated,” he told ABC’s “This Week.”

“However, what we would hope that, as we get into the next weeks to month or so, we will see throughout the entire country the level of infection get to below what I call that area of control, and there's a big bracket of control,” Fauci said.

“Control means you're not eliminating it, you're not eradicating it, but it gets down to such a low level that it's essentially integrated into the general respiratory infections that we have learned to live with. I mean, we would like them not to be present, but they're there, but they don't disrupt society. They don't create a fear of severe outcomes that are broad,” he said.

“You will always get some severe outcomes with respiratory infections. Even in a good pre-COVID era, you have always had that. We'd like it to get down to that level where it doesn't disrupt us, in the sense of getting back to a degree of normality. That's the best-case scenario. We have got to be prepared for the worst-case scenario,” Fauci said.

“I'm not saying it's going to happen, but we have to be prepared, which is, I think, what you were alluding to a moment ago, that we get yet again another variant that has characteristics that would be problematic, like a high degree of transmissibility or a high degree of virulence,” he said.

“But, again, the more people that we get vaccinated, the more people we get boosted, the supplies of therapies, which are going to be really important in preventing people from progressing to advanced disease, we're stocking up on that, getting many, many more tests, in the form of what we have been talking about over the last week, a half-a-billion tests coming out now and another half-a-billion very soon thereafter,” Fauci said.

“If we have those things in place, vaccine, testing, masks, therapy, we could keep it at that low level. That would be the best-case scenario,” the NIAID director said.