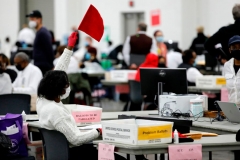 A Detroit election worker seeks assistance while working on counting absentee ballots for the 2020 general election at TCF Center on November 4, 2020 in Detroit, Michigan. (Photo by JEFF KOWALSKY/AFP via Getty Images)

“We came to Pennsylvania today to meet with our legal teams. It's very clear to us and we have declared victory in Pennsylvania. We’re up by 400,000 votes with 86% of the precincts in - 86% and we have Republican votes still coming in from Trump country. The Democrats know that the only way they can win this election is to cheat in Pennsylvania, and we've seen it from day one,," the president's son said speaking at a press conference in Philadelphia.

We found ballots in drainage ditches. They're not letting our poll watchers watch the polls.  They’re not letting them inside. There is video after video of them passing out collateral material in polling sites all over Philadelphia. They're trying to cheat. They're trying to cheat. They have three by five printed posters in polling locations all over the city saying, to vote for Biden and Harris which is totally illegal.

They’re passing out flyers. The supervisors of elections, we have them on video certain ones, wearing literally Biden, Harris face masks in polling locations, which is totally illegal, and now they won’t let – and We brought one great gentleman here with us today, Jeremy, who is a poll watcher down at the convention center. They even won't let him watch as they count the ballots. They put them behind the fence - 40, 50 yards away where they can't see the counting happening.

We are going to win Pennsylvania but They're trying to cheat us out of it, because they know it's their only path to victory. We came here today. We met with all the lawyers. We are going to file a suit in Pennsylvania. It’s a shame that we have to do that. It’s the last thing we wanted to do. It’s the last thing my father wanted to do but This is corruption and it can't happen. It simply can't happen. It's not fair. This isn't democracy.

Giuliani announced that they will bring a federal lawsuit and “expose the corruption of the Democratic Party.”

It is very sad that we are here in the city that's really the birthplace of our democracy. This is among one of the most anti-democratic things I've ever seen or encountered. It's not just here in Philadelphia. This is going on all over the country. We have filed a lawsuit. The lawsuit actually required that when these mail-in ballots that you know are highly suspicious anyway, this form of balloting has always been considered the most prone to fraud.

That's according to The New York Times when it didn’t apply to candidate President Trump. We were supposed to be allowed by law to observe the counting of the ballots. Now observe means to any intelligent person, being able to look at it.

The way it's interpreted by the Democratic, crooked machine of Philadelphia is that the observers can be 20 or 30 feet away, never able to see the ballot itself, never able to see if it was properly postmarked, properly addressed, properly signed on the outside - all the things that often lead to disqualification of ballots or make it very easy to dump 50,000 totally fraudulent ballots because they’re not observed.

This went on for 20 hours. While all of you thought there was some kind of legitimate count going on in Philadelphia, it was totally illegitimate. So We went back to court and we went before a Democrat judge. No need to tell you what the result is if you’re before a Democratic judge - Obviously a political hack who doesn't know the meaning of the word observe! Observe means to be able to look.

Let me also add that this isn't happening just here. We have exactly the same lawsuit in Wisconsin where exactly the same thing happened, except in Wisconsin, mysteriously at 4:00 or 3:00 In the morning, about hundred 120,000 ballots appeared. Here come the ballots! We have no idea if they are signed, if they are postmarked properly, if it isn't just the same person who submitted 100,000 ballots and they all got counted. This is the way they intend to win.