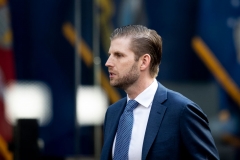 Eric Trump at the 45th President Donald J. Trump's address of the crowd for the opening ceremony of the New York City 100th annual Veterans Day Parade and wreath-laying at the Eternal Light Flag Staff. (Photo by Ira L. Black/Corbis via Getty Images)

(CNSNews.com) - Trump Organization Executive Vice President Eric Trump issued a warning Tuesday night to Republican senators and congressmen who do not object to the Electoral College vote that will make Joe Biden president, saying “their political career is over.”

“I can tell you, Sean, any senator or any congressman that does not, meaning on this side, that does not fight tomorrow, I'm telling you, their political career is over because the MAGA movement is going nowhere. My father has created the greatest movement in American history and I’m telling you they will get primaried next time around, and they will lose if they don't stand up and show some backbone and show some conviction,” Trump said in an interview with Fox News’s “Hannity.”

Trump complained about the voting irregularities he’s seen in Nevada and Pennsylvania, including dead people voting, for instance.

You had minors voting in Nevada. You dead people voting all over. Not only did you have dead people, Sean, you had people who requested an absentee ballot who had been dead for 10 years and then a month later went and actually voted that ballot. You had addresses that didn't exist in states that miraculously received ballots to them.

You had anomalies in the middle of the night where you had 100,000 votes struck, every single one for Biden. You had Republicans being told, go home, we'll pick up the counting tomorrow. They went home, 15 minutes later all the Democrats come back, turn on the lights and start counting votes. I showed up at some of these in Philadelphia. I went to one of these with Rudy Giuliani.

We went to the convention center. They literally had our poll watchers, they wouldn't let them in. They had a do not admit list. Every single one of them was a Republican poll watcher. Why is it that these anomalies only went one way? I think that's what's infuriating to myself and my father, mainly my father, but our entire family.

Trump said that hundreds of thousands of Trump supporters will attend the Stop the Steal rally on Wednesday, “because they know exactly what happened and the media is totally carrying the water for Biden.”

“They know the guy had zero enthusiasm, he did not win. He couldn't draw 12 people into a classroom when my father was filling stadiums. No one believed this guy got 80 million votes. It doesn't feel right. It doesn't look right,” he said.

Trump said that he has “lived a very, very clean life,” yet the Democrats attacked him, his brother Donald Trump Jr., his sister Ivanka, his brother Baron and his entire family.