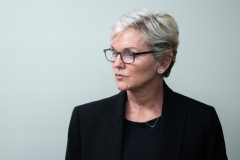 Energy Secretary Jennifer Granholm speaks during the Daily Press Briefing at the White House in Washington, DC, on June 22, 2022. (Photo by JIM WATSON/AFP via Getty Images)

(CNSNews.com) – A new Ipsos poll found that 59 percent of voters don’t know what’s in the Inflation Reduction Act, which is why Energy Secretary Jennifer Granholm said Tuesday that the Biden administration needs to tell people what’s in the bill that was just signed into law “whether it’s before the election or after the election.”

“This is why we need to tell people what's in the bill, whether it's before the election or after the election. We need to let people know how they can access the provisions that will drive savings to them in the bill, and so the cabinet will be on the move to make that clear to people and it's, you know, honestly some of this stuff when you combine, for example, the bipartisan infrastructure law with this Inflation Reduction Act, it is going to be momentous,” she told MSNBC’s “Deadline: White House.”

“One of the things the president said is that there will be jobs all across this country, 9 million jobs to be created before 2030, and these are good jobs. These are good paying jobs. There's incentives for them to be union jobs, so, therefore, with security, with family, you know, family sustaining wages,” the secretary said.

“I always say there's all kinds of jobs for all kinds of people in all pockets of America, and we want all pockets of America to know this is coming their way or this hope and opportunity is coming their way and it does mean they should feel good about their country because we are moving forward, and the president is an inveterate optimist, I am too, and I'm excited to be able to bring some good news to people,” Granholm said.

She said that people were “joyful” that the president signed the bill into law.

“People are joyful. I’ll just say there's this huge sense of at least all of the cabinet secretaries who were there who have a piece of this bill, the Inflation Reduction Act. We just felt so happy. The president clearly was happy. The members of Congress who were there, it was a small ceremony,” the secretary said.

“Obviously there will be a larger one that will include a lot of people to celebrate, but oh, my goodness because it's so consequential, John, the fact that this is the biggest movement on climate of any White House by 10, times 10, bigger than any country has done on this,” Granholm said.

“So it is -- and of course it's huge for real people being able to lower their costs, and the president is really obsessed and focused and really has all of these bills have been focused on how we lower costs for real people, and this will be huge for people. So I don't know, it was just a great moment. We are happy as we can be,” she said.

This was such -- the reason why this was so positive is because there was just this enormous sense of hope that government actually can function, that we are moving forward, that this white house in partnership with the House and the Senate can actually do big pieces of legislation that impact real people, and yeah, people will start to feel this if they take advantage of the tax credit.

There's income levels, there will be guidance about this for people within a week or so, I think even before that in some instances, but the bottom line is costs are dropping for real people. I mean, the electric vehicle pieces, when you look at the gas prices, it is just very significant, when you think about being able to drive for essentially $1 a gallon and there are lower cost models.

I mean, I drive a Chevy Bolt, and that MSRP, the manufacturer suggested retail price for that is like 28,000. You add a $7,500 tax credit, and some states have additional tax credits, might be 2,000, might be 4,000, now that's in an affordable range if you have to get a new car, and then you'd only be paying the equivalent of a dollar a gallon by charging it up. That saves you thousands of dollars every year.

Same thing with installing efficient appliances. If you install them and are saving hundreds of dollars to thousands of dollars every year as a result of that, that brings down prices for real people, bills they pay every single month. That's one of the great pieces of this is that you will see that impact, and you talk about prescription drugs. Some of that will roll in a little bit later as they do the negotiations, but some of it will be effective within months. So I think you'll see real impact for people ASAP.