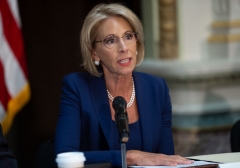 (CNSNews.com) - Education Secretary Betsy DeVos submitted her letter of resignation on Thursday in the wake of the mob attack on the U.S. Capitol Building.

In a letter to President Donald Trump, the secretary said, “There is no mistaking the impact your rhetoric had on the situation, and it is the inflection point for me.”

“We should be highlighting and celebrating your Administration’s many accomplishments on behalf of the American people. Instead, we are left cleaning up the mess caused by violent protestors overrunning the U.S. Capitol in an attempt to undermine the people’s business. That behavior was unconscionable for our country. There is no mistaking the impact your rhetoric had on the situation, and it is the inflection point for me,”  DeVos wrote in the letter.

"Impressionable children are watching all of this, and they are learning from us. I believe we each have a moral obligation to exercise good judgment and model the behavior we hope they would emulate. They must know from us that America is greater than what transpired yesterday. To that end, today I resign from my position, effective Friday, January 8, in support of the oath I took to our Constitution, our people, and our freedoms,” she wrote.

On Wednesday prior to her resignation, the secretary released a statement condemning the Capitol attacks.

“The eyes of America’s children and students -- the rising generation who will inherit the republic we leave them - are watching what is unfolding in Washington today. We must set a better example for them, and we must teach them solemn obligations and duties that come with the title ‘American,’” she said in a statement on Twitter.

“The peaceful transfer of power is what separates American representative democracy from banana republics. Congress assembled today to fulfill its Constitutional duty to certify the election of the next President of the United States, the same Constitution I swore an oath to support and defend,” DeVos said.

“An angry mob cannot be allowed to attack our Capitol and impede this process. The disruptions and violence must end, the law must be upheld, and the work of the people must go on,” she added.

As CNSNews.com previously reported, several other members of the Trump administration, including Transportation Secretary Elaine Chao, announced their resignations in the wake of the attack.

Besides DeVos and Chao, U.S. Special Envoy for Northern Ireland Mick Mulvaney, who once served as Trump’s chief of staff, announced his resignation on CNBC’s “Squawk Box” on Thursday.

Sen. Elizabeth Warren (D-Mass.) reacted to news of DeVos’s resignation, calling her “the worst Secretary of Education ever,” and saying “Good riddance.”

The senator said that she’s not surprised the secretary would rather quit than help invoke the 25th Amendment to have President Donald Trump removed from office two weeks before the inauguration of President-Elect Joe Biden.

“Betsy DeVos has never done her job to help America’s students. It doesn’t surprise me one bit that she’d rather quit than do her job to help invoke the 25th Amendment. Good riddance, Betsy. You were the worst Secretary of Education ever,” Warren tweeted.