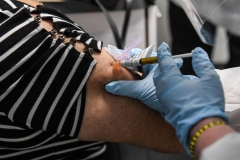 Sandra Rodriguez, 63, receives a COVID-19 vaccination from Yaquelin De La Cruz at the Research Centers of America (RCA) in Hollywood, Florida, on August 13, 2020. (Photo by CHANDAN KHANNA/AFP via Getty Images)

(CNSNews.com) – Dr. Moncef Slaoui, scientific head of Operation Warp Speed, told “Fox News Sunday” that it takes 75 or 80 percent of people vaccinated in the United States to establish herd immunity, something he anticipates will happen between May and June.

“So we need to have immunized about 75 or 80% of the U.S. population before herd immunity can really be established. We hope to reach that point between the month of May and the month of June. It is however critical that most of the American people decide and accept to take the vaccine,” he said.

"We are very concerned by the hesitancy that we see, the level of hesitancy that we see, but we hope that now that all the data is out and available to be discussed in detail, that people will keep their mind open to listen to the data and hopefully agree that this is a very effective and safe vaccine and therefore take it,” Slaoui said.

When asked how long it will take the top two priority groups – health care workers on the front line and nursing home residents – to be fully vaccinated with both doses of the Pfizer vaccine, Slaoui said, “So we plan to have about 40 million doses of vaccine available to us and distributed in the U.S. by the end of this year, so by the end of December.

“Those would be both Pfizer vaccine and the Moderna vaccine, and the next month we will have about 50 million to 80 million doses of vaccine distributed in January and another same number in February, so all in all, we hope to have immunized 100 million people, which would be the long-term care facility people, the elderly people with comorbidities, the first line workers, the health care workers,” he said.

Host Chris Wallace noted that Pfizer said it will keep its commitment to deliver 100 million doses in short order, but that it can’t deliver another 100 million or more until the summer because it has contracts with other countries. He said that the main company – the one we were betting on the most, Astrazeneca, is behind schedule in its tests. He asked if there is a possibility that by the spring, the U.S. won’t have enough supplies to go around.

“I think -- the short answer is most likely no, and the reason is really our plan from day one has been to have a portfolio of products. We have six different products being developed. Pfizer is one of them. Moderna, which likely would be approved by Friday probably this coming week, is able to produce 100 million doses in the first quarter, and we just announced on Friday that we committed to acquire another 100 million doses,” Slaoui said.

“This will be delivered in the second quarter of 2021. Johnson & Johnson company is in the last stages of conducting their phase three trial with their vaccine as a one shot vaccine. That vaccine is likely to be ready for authorization late in January or early in February, and by then, we will be able to have anywhere between 20 and 60 million doses already in the month of February available to start immunizing and then going forward, many more doses on a monthly basis,” he said.

“Astrazeneca is one of them. We expect them to potentially be approvable somewhere late in February, and then we have two more coming afterwards. So Pfizer is not the sole supplier, but having said that, we are working with Pfizer to continue helping them and supporting them achieve the objective of providing us with another 100 million doses in the second quarter of 2021,” Slaoui added.

Wallace asked what it would mean for the pandemic if more than half of Americans didn’t get the vaccine. He pointed to a recent poll that showed 27 percent of Americans are not sure they will get vaccinated, and 26 percent say they won’t get it.

“Unfortunately, there was so much politics around in the context of this vaccine that there's been a confusion between how thorough and scientific and factual the work that has been done is and the perception that people are thinking as we cut corners or anything like that,” he added.

“I can guarantee you that no such things have happened, that we follow the science. It's actually a remarkable achievement of science, academia, the industry ecosystem and the U.S. government working together relentlessly that has allowed this to happen, and please, just keep your mind open. Look at the data. Look at the people who get the vaccine and how they will be protected and be safe and hope most people will finally decide to take this vaccine,” Slaoui said.

Wallace pointed to reports that White House Chief of Staff Mark Meadows pressured FDA Commissioner Steven Hahn to approve the Pfizer vaccine on Friday or he might lose his job. He also noted that President Donald Trump tweeted about it, saying, “Get the vaccines out now, Dr. Hahn. Stop playing games and start saving lives.”

When asked whether that was helpful in persuading people that the vaccine is all about science and not politics, Slaoui said, “I think first those are rumors. I can't know whether they are right, true or not. I do think it's not helpful because it's not needed. The day before on Thursday this past week, it was actually a remarkably transparent discussion over the whole day transmitted on TV live of all the data of the Pfizer vaccine.

“There was a vote by independent experts who said yes, this vaccine is safe and effective and should be used in people that are 16 years of age and older, and the next day the FDA was going to look specifically in some more points and more importantly, actually go through administrative steps and approve the vaccine. If that phone call happened, I think it was useless and unfortunate, and so are some of the tweets,” he said.