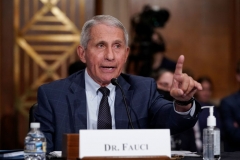 Dr. Anthony Fauci, director of the National Institute of Allergy and Infectious Diseases, responds to questions by Senator Rand Paul during the Senate Health, Education, Labor, and Pensions Committee hearing on Capitol Hill in Washington, DC on July 20, 2021. (Photo by J. SCOTT APPLEWHITE/POOL/AFP via Getty Images)

Stephanopolous pointed out that NIH released a letter that showed the subcontractor behind “risky COVID research in Wuhan” did not disclose some results in a timely manner. “Now, some critics and analysts have seized on that to say you and others have misled the public about U.S. funding of this so-called gain-of-function research. The NIH says that's false. Our medical unit backs that up,” he said.

In an interview with “Axios on HBO,” Sen. Rand Paul (R-Ky.) said that Fauci should be fired “for lack of judgment,” adding that Fauci will probably never admit that he lied and that Fauci will “continue to dissemble and try to work around the truth and massage the truth.”

Fauci said, “Well, I obviously totally disagree with Senator Paul. He's absolutely incorrect. Neither I nor Dr. Francis Collins, the director of the NIH lied or misled about what we’ve done.

“The framework under which we have guidance about the conduct of research that we fund, the funding at the Wuhan Institute was to be able to determine what is out there in the environment, in bat viruses in China,” he said.

“And the research was very strictly under what we call a framework of oversight of the type of research, and under those conditions which we have explained very, very clearly, does not constitute research of gain of function of concern,” Fauci said.

“There are people who interpret it that way, but when you look at the framework under which the guidance is, that is not the case. So I have to respectfully disagree with Senator Paul. He is not correct that we lied or misled the Congress. It's just not correct, George. I’m sorry,” he added.

STEPHANOPOLOUS: That -- right. It showed that what was being researched was very far from the COVID -- the SARS-COVID virus, but it did show that the subcontractor (ph) did not release some results in a timely manner. What did learn from the letter? Does it show that some of the research we were finding was riskier than we know?

FAUCI: No, it isn't. We knew what the risk was, and what the oversight is. Certainly, they should have put their progress report in a timely manner. No denial of that, and there will be administrative consequences of that, but one of the things that gets mixed up in this, George, and it really needs to be made clear to the American public.

There’s all of this concern about what's gain of function or what's not, with the implication that that research led to SARS-CoV-2, and COVID-19, which, George, unequivocally anything that knows anything about viral biology and phylogeny of viruses know that it is molecularly impossible for those viruses that were worked on to turn into SARS-CoV-2 because they were distant enough molecularly that no matter what you did to them, they could never, ever become SARS-CoV-2.

And yet when people talk about gain of function, they make that implication which I think is unconscionable to do, to say, well, maybe that research led to SARS-CoV-2.

You can ask any person of good faith who’s a virologist, and they will tell you, absolutely clearly, that that would be molecularly impossible. So, things are getting conflated, George, that should not be conflated.