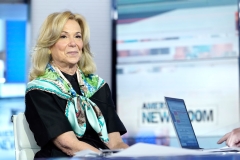 (CNSNews.com) - Dr. Deborah Birx, former White House Coronavirus Task Force coordinator for the Trump administration, told CBS’s “Face the Nation” on Sunday that she wore a mask when she attended the White House Correspondents’ dinner on Saturday, because the odds are there were probably 15 to 20 people there who are infected despite being tested that morning.

When asked how she judges risk, Birx said, “I have to judge it every day because, like you, I have children under five, unvaccinated grandchildren, and I have a 93-year-old that lives in our house. So I have to constantly be aware of my risk, yet I have to work.

“So, I completely masked last night because my assessment was there were probably, just by odds and science, probably 15 to 20 people infected, even though everyone was tested in the morning or within 24 hours, and so I just always know and then I keep testing,” she said.

“So I'll test every day for five days after an exposure, and I consider that an exposure. I tested this morning because I knew I was going to see you in person, unmasked, and I think that's just what we need to do. If you have vulnerable people in your household, whether it's children or elderly, you have to continually assess your risk,” Birx added.

When asked whether we are done with massive waves of infection, Birx said, “I like to look at the whole spectrum of the last two years, and so if you look at what we've been through, we went through a mini alpha variant surge in the same locations last year at this time.

“Then we went into that lull of May, where everybody thought it was over, and in middle of June, and then we had the predictable surge across the south, and what you need to be looking at is global data. So I follow South Africa very closely. They're good about testing. They're good about sequencing and find their variants. They're on an up slope again,” she said.