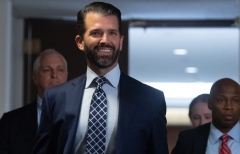 “Hey guys, you actually all did something I didn’t realize was possible. I’m looking at the crowd here and the tens of thousands, and hundred thousand people here, and you did it all without burning down buildings. You did it without ripping down churches, without looting? I didn't know that that was possible,” the president’s son said.

According to the media, when you have a large gathering of peaceful protestors, they’re supposed to burn it all down. See guys, we can do it right, but the fact that you are all here on this rather cold January day tells me all I need to know.

It should be a message to all the Republicans who have not been willing to actually fight, the people who did nothing to stop the steal. This gathering should send a message to them. This isn't their Republican party anymore,” he said.

All you have gotta do is look to Georgia where you had Republicans saying well, well, I don't like the way the game is played so let's take our ball and go home. Guys, hey guess what? That was music to Chuck Schumer's ears. That was music to Nancy Pelosi's ears, and that is what so many in the Republican establishment have created, that sort of mentality. Okay, we'll turn the other cheek. We'll roll over and die. We'll fold and give up. No more!

So to those Republicans, many of which may be voting on things in the coming hours. You have an opportunity today. You can be a hero or you can be a zero, and the choice is yours, but we are all watching. The whole world is watching, folks. Choose wisely. Because if you just roll over, if you don't fight in the face of glaring irregularities, statistical impossibilities.

That's right, guys, that's the message. These guys. That’s the message. These guys better fight for Trump because if they're not, guess what? I'm going to be in your backyard in a couple of months, guys like Scott here. Look at, wow, I can't go through the whole list cause I don't have 45 minutes to go through all the patriots that have been fighting, that have been on the ground, that have mobilized to put good Republicans in those positions.

Guess what, folks, if you are going to be the zero and not the hero, we're coming for you and we'll have a good time doing it. We got to start fighting like the Democrats do. Right? We've got to play their game. We have to take their fight to them their way. Our reluctance to do that over the last few decades is why we are in the position that we're in.

So today, friend or foe, today Republicans, you get to pick a side for the future of this party. Again, I suggest you choose wisely. So Kimberly, thank you for all of your fight. How did Kimberly do, folks? One of the great fighters out there to my family and father but most importantly to all of you red-blooded patriotic Americans. Thank you for being in this fight with us.

Trump Jr., also mocked Rep. Emanuel Cleaver (D-Mo.) who, as CNSNews.com previously reported, closed the opening prayer for the 117th Congress by saying, “Amen and Awoman.” He also mocked the results of a taxpayer-funded study on transgender athletes which showed that biological males who consider themselves transgender females have an advantage over biological females.

“Thank you for standing up to the bullshit. Right? Amen and awoman, right? I know. I know, but that shows you literally the mentality of where the Democrat Party is, right? I think I put it up on my Instagram which is being censored to hell right now but I put it up yesterday. They spent money on a study that came to the incredible conclusion yesterday that trans women playing in female sports have a competitive advantage. No s---t. Who could have seen that coming? I had no idea. I’m glad we spent probably millions figuring that out,” he said.