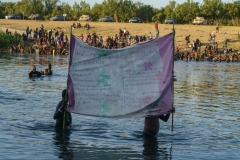 Haitian migrants carry a banner through the Rio Grande pleading for help from US President Joe Biden in Ciudad Acuna, Coahuila state, Mexico on September 20, 2021. (Photo by PAUL RATJE/AFP via Getty Images)

(CNSNews.com) - DHS Secretary Alejandro Mayorkas on Tuesday condemned the actions of Border Patrol agents on horseback who were accused of using “whips,” which were actually horse reins, on Haitian migrants trying to cross the Rio Grande River into Del Rio, Texas this week.

“We do not condone, we do not tolerate any mistreatment of any migrant. The actions we're taking are swift and strong, and we will take further action as the facts adduced in the investigation compel,” Mayorkas tweeted on Tuesday night.

When asked why the DHS secretary’s statements on the matter evolved Monday night from his initial reaction, White House Press Secretary Jen Psaki said that Mayorkas hadn’t initially seen the photos of the incident.

“First, with regard to what’s happening at the border with the Haitian border crossers, we initially saw Mayorkas make one statement, and then, last night, that began to evolve. Now he’s meeting with the vice president. Can you explain the evolution of what’s going on and what the administration hopes to learn?” a reporter asked Psaki during a gaggle on board Air Force One en route to Washington, D.C., from New York City.

PSAKI: Sure. Well, when the Secretary made comments earlier in the day yesterday, he had not yet seen the photos. As you all remember, they all started to emerge right before I did the briefing yesterday, kind of later in the morning, and he spoke right around that same time.

Once he had an opportunity to see the photos, see the video footage — as you saw him say in a statement last night and again this morning, he was horrified. He believes this does not represent who we are as a country and does not represent the positions of the Biden-Harris administration.

I’d also note that in his statement last night, he conveyed that there would be an investigation and that he was sending additional personnel to the border as well. So, in terms of his meeting with the vice president today, I think it’s just to provide an update on where things stand.

REPORTER: At this point, has the president seen the photos or been briefed about this whole situation as it has kind of developed in the past day?

PSAKI: Yes. He’s aware and has been briefed on the situation.

REPORTER: Has he seen the pictures, though?

PSAKI: I believe he has, yes.

REPORTER: Okay, and what was his reaction?

PSAKI: I think I spoke to this exact question yesterday where — or I thought I did — or last night. Maybe I didn’t. You know, he believes that the footage and photos are horrific. They don’t represent who we are as a country, and he was pleased to see the announcement of the investigation. He certainly supports that, and, obviously, there’ll be a determination made on next steps once that concludes.

REPORTER: Does the president believe those border agents should be punished in any way, or is he just going to wait for the investigation?

PSAKI: Well, again there’s a process in place for a reason. Obviously, we hope that investigation happens quickly, and it will determine, as was stated clearly in the secretary’s statement last night, what disciplinary action should be taken.

During his trip to the United Nations, President Joe Biden responded to a reporter’s question about whether the southern U.S. border was under control.

“We will get it under control,” the president said.

A reporter asked Psaki on Tuesday what the White House has asked Mexico to do regarding the thousands of Haitian migrants that have camped out near an international bridge in Del Rio.

PSAKI: We, of course, continue to be in close touch with the Mexican government about how to address a challenging situation at the border, including with a number of Haitians who have come across the border as well, but this is not about one country or individuals coming from one country.

So, it is a part of a broad and ongoing conversation with the Mexican government about how we can continue to work together to address the migration situation at the border, but I don’t have any specific updates for you.

Meanwhile, 26 Republican governors wrote a letter to Biden asking to meet with him on the border crisis. When asked about it Tuesday, Psaki said she hadn’t seen the letter and therefore, couldn’t comment on it.

"The months-long surge in illegal crossings has instigated an international humanitarian crisis, spurred a spike in international criminal activity, and opened the floodgates to human traffickers and drug smugglers endangering public health and safety in our states," the governors wrote.

"We must end the current crisis and return to border operations that respect the laws of our land and the lives of all people, including those in our states looking to the federal government to enforce and protect our nation’s borders," the governors added.

“Twenty-six Republican governors sent a letter — signed a letter sent to Biden asking for a meeting in the next 15 days on the border situation. What is the president’s response to that? Is there — does he — would he agree to meet with the Republican governors about this?” a reporter asked the press secretary.

“I haven’t seen the letter, so I don’t know that we have any direct response,” Psaki replied.