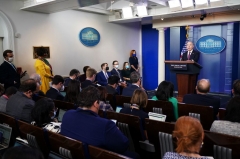 Homeland Security Secretary Alejandro Mayorkas speaks during the daily press briefing in the Brady Briefing Room of the White House in Washington, DC. on September 24, 2021. (Photo by MANDEL NGAN/AFP via Getty Images)

(CNSNews.com) - DHS Secretary Alejandro Mayorkas said Friday that he’s not concerned about the integrity of the investigation of the horse-mounted Border Patrol officers accused of whipping Haitian migrants at the border in Del Rio, Texas, despite President Joe Biden saying the migrants had been “strapped.”

As CNSNews.com reported on Friday, Biden promised “there will be consequences” for the horse-mounted Border Patrol agents trying to prevent Haitians from entering the U.S. illegally.

“But it was horrible what you saw -- to see people treated like they did, horses really running over people being strapped,” the president said.

During the White House press briefing on Friday, which was attended by Mayorkas, Fox News White House Correspondent Peter Doocy pointed to the fact that the photographer who took the pictures in question said he never saw Border Patrol agents whip anyone.

DOOCY: Just to go back please to the images of these mounted Border Patrol officers. You said on Saturday or rather on the 20th, to ensure control of the horse, long reins are used. The person who took these photos of the Border Patrol agents says I’ve never seen them whip anyone so why is the president out there today talking about people being strapped?

The horses have long reins, and the image in the photograph that we all saw and that horrified the nation raised serious questions about what all occurred, and of-- as I stated quite clearly, it conjured up images about what occurred in the past.

DOOCY: And just to follow up please, before the facts are in, is it helpful to your investigation for the president of the United States to use inflammatory language like people being strapped?

Fox News reported Friday that photographer Paul Ratje took the photos at the center of the controversy.

"I’ve never seen them whip anyone," Ratje told KTSM, an NBC affiliate in El Paso, Texas. "He was swinging it, but it can be misconstrued when you’re looking at the picture."

"Some of the Haitian men started running, trying to go around the horses," Ratje said.