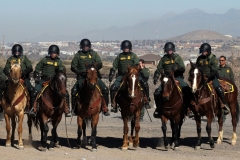 The investigation was initially referred to the Office of Inspector General (OIG) by U.S. Customs and Border Protection (CBP), but the inspector general’s office “declined to investigate and referred the matter back to CBP’s Office of Professional Responsibility (OPR).

“OPR then immediately commenced investigative work, including its review of videos and photographs and the interview of witnesses, employees, and CBP leadership.  OPR has followed customary process in its investigation of this matter,” according to the DHS website.

The investigation results will then go to CBP management to determine whether disciplinary action is appropriate. If it is, the discipline will be imposed.

“At that time, the employees will be afforded due process, including an opportunity to respond, and any corrective actions will comport with applicable laws and regulations.  The disciplinary process, which is separate from the fact-finding investigation, is subject to certain timelines established in CBP’s labor-management agreement with the employees’ union of the United States Border Patrol,” DHS said on its website.

“OPR may share its initial findings with the United States Attorney’s Office to alert federal prosecutors of the facts of the case and ensure that administrative actions do not inadvertently compromise any potential criminal investigation. Depending on the circumstances, OPR may wait to interview the subject(s) of an investigation until the U.S. Attorney makes a decision on whether or not to pursue the case,” according to DHS.

“If the U.S. Attorney accepts the case, OPR coordinates with the Department of Justice on the investigation.  In most situations, OPR defers to the prosecuting entity, which generally means that it will wait for the completion of the criminal case before conducting interviews of the subjects involved.

If the U.S. Attorney declines the case, OPR continues with the final steps remaining in the investigation.  The results of the completed investigation are then provided to CBP management to evaluate whether disciplinary action is warranted.