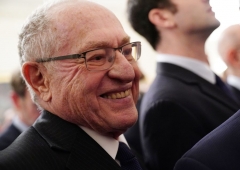 Alan Dershowitz (C), impeachment defense lawyer for US President Donald Trump, attends the announcement of Trump's Middle East peace plan in the East Room of the White House in Washington, DC on January 28, 2020. (Photo by MANDEL NGAN/AFP via Getty Images)

(CNSNews.com) - Harvard Law professor Alan Dershowitz told Fox News’s “Sunday Morning Futures” that Senate Republicans did the right thing in acquitting former President Donald Trump, because the Senate trial was not a referendum on his actions during the Capitol riot, it’s a referendum on the Constitution, and the Constitution won.

“This was a rebuke to 144 alleged scholars who threatened Trump's lawyers and said if you dare to even raise the 1st Amendment defense, that would be legally frivolous, and you could be disciplined and disbarred, and the Senate smacked them down and said not only was it not a legally frivolous defense, it was a valid defense,” Dershowitz said.

“Quite a number of senators voted on 1st Amendment grounds. Others voted on the constitutional limitation, and some voted on the merits. All you need is enough together, and I think the Trump team made a very effective argument at the end saying you don't have to accept the initial vote that the Senate said in that jurisdiction. You could stick to your dissenting vote,” he said.

“Many of them did. You could apply the 1st Amendment. This is not a referendum on Donald Trump's actions … on January 6th. This is a referendum on the Constitution, and the Constitution prevailed and won, and a lot of the media misunderstands it. CNN was saying, oh, it's a contradiction by McConnell. No, it wasn't a contradiction,” Dershowitz said.

“If the Senate had voted the other way, it would mean anybody who ever held federal office could be impeached without any statute of limitations, without any limitation of time. It would be an open invitation for one party to preclude a candidate from another party from running. So the Constitution won,” Dershowitz added.

“So it was a very good day for the Constitution, not such a great day for Donald Trump, because McConnell and others criticized him. Look, the reason that they went for witnesses is they counted the votes. They saw that McConnell said he was going to vote to acquit, so they threw a Hail Mary, and it backfired, caused a fumble in the end zone. It totally backfired, because the Trump team said, all right, you call one witness, we'll call 90. We'll have depositions. This trial will never be over,” he said.

“So they backed away and allowed for just a stipulation to go in on a hearsay statement. The result was the right result yesterday, and it was a very, very good day for the Constitution,” Dershowitz added.

Bartiromo asked Rep. Jim Jordan (R-Ohio) why the Democrats pulled back after the witness vote and whether they were afraid that the Trump team would call House Speaker Nancy Pelosi (D-Calif.).

“So the reason they pulled back was we were going to call those witnesses, and I would agree in part with Mr. Dershowitz. It was a great day for President Trump and a great day for the Constitution. Both were true. How can you impeach somebody for engaging in speech protected by the Constitution as a private citizen?” the congressman said.