Cruz: ‘We’ve Heard Virtually Not a Single Word About Judge Barrett’ from Democrats 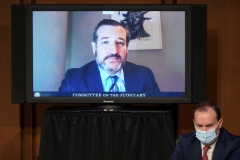 “At the very beginning let me observe, as Sherlock Holmes famously observed, that what speaks the loudest is the dog that didn't bark. Which is today of every Democrat who’s spoken we've heard virtually not a single word about judge Barrett. We've heard a lot of attacks at President Trump. We understand our Democratic colleagues are not supporters of the president,” he said in his opening speech at the hearing.

“We have heard a lot of political rhetoric. We just heard the senator from Rhode Island directing some attacks at Senator Cornyn from Texas, and I understand there is an election in a few weeks, so those political attacks are not surprising, but we've heard very little about the nominee who is here and whose confirmation we're considering,” Cruz said.

The senator pointed out that Barrett’s credentials are “impeccable” and that she graduated number one in her class at Notre Dame Law School – a feat that “likely not a single member of this committee” can match.

“Perhaps my colleague Mike Lee can disagree with that statement but it is a very impressive accomplishment. Judge Barrett went on to be a clerk to the great justice Antonin Scalia. One of the greatest justices ever to serve on the Supreme Court. We heard celebration from Senator Leahy about the fact that he was confirmed 98-0,” Cruz said.

“From there she became a law professor for two decades at Notre Dame Law School teaching the law to her students where she was beloved, where she was respected, where she was a serious, careful scholar, and now she is one of the most respected federal court of appeals judges in the country,” he added.

“None of the discussions from our Democratic colleagues addressed any of that because … those credentials are on their face impeccable. Indeed, the American Bar Association, which typically leans hard left and has a long pattern of favoring Democratic nominees over nominees appointed by Republican presidents, had no choice but conclude that she was well qualified as a majority of the board did,” Cruz said.

“Judge Barrett's qualifications are remarkable, and I believe she will serve as an excellent Supreme Court justice. So what is it our Democratic friends have focused on? One thing they've focused on is history, and they claim the fact that this nomination is occurring at all is illegitimate. Doesn't matter who Judge Barrett is, doesn't matter what she’s done, doesn't matter her record or her extraordinary family story of doing all of this while being a mom to seven kids, the timing of the nomination our Democratic friends tell us makes it illegitimate,” he said.

Cruz pointed out that the question of “what happens when there is a Supreme Court vacancy during a presidential election year” came up 29 times throughout U.S. history.

“So 29 times presidents have faced the same circumstance, and presidents have nominated individuals to fill those positions all 29 times. 100%. Doesn't matter Republican or Democrat, from a president's perspective it's easy. If there is a vacancy even during a presidential election year, you make a nomination. Forty-four individuals have served as president throughout the history of our country, half of them, 22 of the presidents we have had, have made Supreme Court nominations for vacancies that occurred during a presidential election year,” the senator said.

Cruz also noted that it’s not the job of the Supreme Court to make policy.

“The court's job is to decide cases according to the law and to leave policy-making to the elected legislators. That doesn't mean policy making is unimportant. It means to the contrary. Policy making is very important, and the people need to have a direct check on policy making. You know what? If a rogue court implements policies you don't like, you, the American people, have very limited ability to check them,” he said.

“If a rogue Congress implements policies you don't like, you have a direct ability to check us by throwing the bums out and voting them out and voting in new representatives,” the senator said.

“Much of the argument this morning has concerned Obamacare and policy arguments, policy arguments that are occurring in the Senate, which is the right place for them to occur, a legislative body, but our Democratic colleagues simply want a promise from a judicial nominee that this nominee will work to implement their policy vision of healthcare,” he said.

"That is not a judge's job. That is not the responsibility of a judge. In fact, making that promise would be violating the judicial oath,” Cruz added.