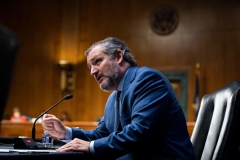 Senator Ted Cruz, a Republican from Texas, speaks during a Senate Foreign Relations Committee hearing on "Review of the FY2023 State Department Budget Request," in Washington, DC, on April 26, 2022. (Photo by AL DRAGO/AFP via Getty Images)

(CNSNews.com) - The leaking of a draft of Supreme Court Justice Sam Alito’s opinion that would overturn Roe v. Wade represents “the most serious breach in the history of our nation,” Sen. Ted Cruz (R-Texas) said Sunday.

“It is difficult to overstate just how destructive this is to the court. It’s the most serious breach in the history of our nation, and the court depends on trust to be able to deliberate and decide, and this partisan activist who’s going to be caught, who will be fired, who will be disbarred, and I hope who will be criminally prosecuted decided to destroy the court instead,” he told Fox News’s “Sunday Morning Futures.”

Cruz said he believes the leaker is one of 12 law clerks to one of three liberal justices.

I think it would be unimaginable for a justice to do this, and then you’ve got 36 law clerks. Each justice has four law clerks. You might have a secretary or a clerical assistant, but realistically, it's not somebody like that, because the leaker also knew confidential information about how the justices voted at conference.

That is held incredibly close hold within the Supreme Court. When I was a law clerk for Chief Justice Rehnquist, the rules were the same as they are now, which is that you do not take opinion drafts out of the building. All of the work is done in the building. That means midnight, 1 o’clock, the law clerks are all there working at their desks.

When you finish with a draft, every law clerk has under his or her desk a burn bag. It's a brown and red bag. You put it in there. That burn bag is later sealed. It’s shredded, and in fact, it's shredded twice. It’s shredded horizontally. It’s shredded vertically, and then it’s burned.

Beyond that, you and I have both known a lot of Supreme Court clerks. Many of them are book smart. Very few of them are street smart. I’m confident we do not have a master criminal working at the court. I think there are going to be electronic records.

There are going to be e-mails or texts or there’s going to be personal meetings between one of those 12 law clerks and the reporters at issue here. They're also– the Supreme Court has pretty serious security measures designed forensically to ascertain where an opinion was printed, what printer produced it.

So I believe this investigation is going to uncover the leaker, and I think it’s going to do so relatively quickly.

Cruz said that the leaker is probably “some left-wing woke twit who decided that he or she was so upset that they were going to violate the trust that they owe to their justice, to the court, to the rule of law.”

“I think it's one of those 12 law clerks. This is the culmination of a multi-year campaign, from Senate Democrats to politicize and destroy the court, and it’s had many aspects,” the senator said.

“It featured Chuck Schumer standing on the steps of the court calling out justices by name, threatening to unleash the whirlwind that they won’t know what hit them if they don’t vote the way Schumer wants. That is incredibly destructive to the court,” he said.

“It features Senate Democrats threatening to pack the Supreme Court, to add four left-wing justices immediately and grow it to 13 justices, and I think what happened here is you had some left-wing woke twit who decided that he or she was so upset that they were going to violate the trust that they owe to their justice, to the court, to the rule of law,” Cruz said.

He said that the intent of the clerk who leaked Alito’s draft was to inspire liberal activists to protest outside the Supreme Court justices’ homes and try to bully them into changing their thinking.

“That was the intent of this clerk. We’ve got left-wing groups that have published the addresses of justices. The intent of this clerk was to bully and threaten and intimidate the justices to changing their votes, and I gotta to say this week it was shameful that the White House refused to condemn violent protesters threatening the families of the Supreme Court,” Cruz said.

“It is disgraceful and Joe Biden used to be chairman of the Judiciary Committee. Joe Biden knows it’s disgraceful. He’s literally threatening the lives of these justices by the mob they are unleashing. It’s the same thing we saw with Black Lives Matter and Antifa riots. The left embraced them, and now they are embracing mob violence to get their partisan outcome,” he said.