Cruz: HR 1 Automatically Registers Anyone Who Interacts with Government to Vote, Including Illegal Immigrants 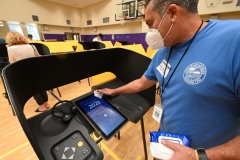 Election official Horacio Rameriz disinfects a voting machine between users as people cast their ballots for the US presidential election at Horace Mann Elementary School on October 30, 2020 in Beverly Hills, California. (Photo by ROBYN BECK/AFP via Getty Images)

(CNSNews.com) – HR 1, the ‘For the People Act,’ will automatically register anyone who interacts with the government, which includes millions of illegal immigrants, and it allows felons to vote, Sen. Ted Cruz (R-Texas) said Wednesday.

During an appearance on Fox News’s “The Story with Martha McCallum,” host Martha MacCallum pointed out that the legislation, which is now in the Senate, would tie the hands of state legislatures, essentially codifying what happened in Pennsylvania during the 2020 elections.

“This bill is much worse than that. Many people are calling at this time Corrupt Politicians Act, because what it does is It profoundly corrupts our democratic process. It has the federal government take over all elections. It sets aside virtually all of the state election integrity laws. For example, 29 states have voter ID laws. It sets every one of them aside, strikes them down,” Cruz said.

“It is profoundly misguided, and it is I think it's the biggest threat to the integrity of our elections we're facing. It's a power grab by the Democrats, and it’s very dangerous,” Cruz said.