Cruz to DHS Secretary: ‘You’re Right’ the Immigration System Is ‘Broken, But You Broke It’ 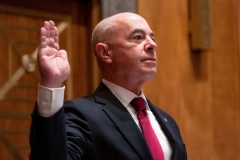 At the DHS oversight hearing, Cruz grilled Mayorkas on how many illegal immigrant children were housed in caged Border Patrol facilities during the Biden administration, how many women or children were sexually assaulted while trying to cross the U.S. border and how many rapists, murderers or child molesters have been released into the country - information which the secretary could not provide.

CRUZ: You testified several times that our immigration system is ‘fundamentally broken.’ True or false, under President Trump we saw the lowest rate of illegal immigration in 45 years.

MAYORKAS: Again, I don’t know the number of years, but it’s certainly a historic high.

CRUZ: So you’re right it’s broken, but you broke it. Let me ask you in the calendar year 2021, how many illegal immigrants do you expect to have crossed illegally into the United States?

MAYORKAS: I believe the total number of encounters has been referenced in this hearing earlier is approximate---just under 1.7 million.

CRUZ: But there’s two months remaining. Is it correct that you project just over 2 million illegal immigrants in calendar year 2021?

MAYORKAS:  I believe that is correct, Senator. I know for the last three months we’ve seen a drop in the numbers by reason—

CRUZ: And how many children do you project in 2021?

CRUZ: How many children will have crossed illegally in 2021?

MAYORKAS: I believe that thus far through October 31st, Senator, approximately 125,000 unaccompanied children have been transferred to the shelter and care of Health and Human Services.

CRUZ: Now you told another senator you don’t know how many gotaways there have been?

MAYORKAS: I will have to circle back, Senator, with that information.

CRUZ: So that wasn’t a fact that you thought was relevant to this hearing?

MAYORKAS: Oh, it is absolutely relevant. I understand why the question is posed. It’s a fact of great---

CRUZ: But you’re not prepared to answer it. How about this. How many deaths? How many illegal aliens have died crossing illegally into the United States under Joe Biden’s administration?

MAYORKAS: I don’t have that data.

CRUZ: So the deaths, you didn’t prepare that data either. Alright, how about this. How many children have been in the Biden cages in calendar year 2021?

MAYORKAS: Senator, I respectfully disagree with your use of the term cages.

MAYORKAS: Senator, I can provide to you the following figure that when – let me say, that when a child ---

CRUZ: It’s a simple question. How many children have been in those cages?

MAYORKAS: I respectfully am not familiar with the term cages and to what you are referring.

MAYORKAS: Senator, there are three types of facilities. There’s the--

MAYORKAS: That is a soft-sided facility. It is not

CRUZ: Are you going to answer the question? How many children have been in that facility?

MAYORKAS: I will have to circle back with you with the precise number.

CRUZ: By the way, here’s a photograph of the Biden cages.

MAYORKAS: Senator, that is precisely why I articulated--

CRUZ: Children sleeping on floors, crashed in upon each other. When I took this photograph, the rate of COVID positivity was over 10 percent.

MAYORKAS: May I speak, Senator?

CRUZ: You can answer the question. How many kids have been in these conditions?

MAYORKAS: That is precisely why I stated in March of this year that a Border Patrol station is no place for a child, number one. Number two---

CRUZ: Secretary Mayorkas, you’re not answering my question, so let me ask you this. In the past year, has Joe Biden been down to see the Biden cages?

MAYORKAS: Senator, I will again—

CRUZ: Has Joe Biden been down to see this facility?  Yes or no?

MAYORKAS: The president has not been down to the border--

CRUZ: Okay, no. Has Kamala Harris been down to see the Biden cages, this facility? Yes or no.

MAYORKAS: The vice president was at the border--

CRUZ: Has she been down to see this facility? I know she went to El Paso. Has she seen the Biden cages?

MAYORKAS: They’re not cages, and--

CRUZ: What are these walls?

CRUZ: Has Kamala Harris seen them? Yes or no.

MAYORKAS: Senator, the, the--

CRUZ: It’s a simple question. Yes or no. We don’t need a paragraph. Yes or no. Has Kamala Harris been down to see these detention facilities?

MAYORKAS: She has not been down to—

CRUZ: Has any Democratic senator on this committee been down to see the Biden cages?

MAYORKAS: I will once again disagree with your use of terminology---

CRUZ: These facilities--- Has any Democratic member of this committee given a damn enough to see the children being locked up by Joe Biden and Kamala Harris because of your failed immigration policies?

MAYORKAS: Senator I cannot speak to the members of this committee_

CRUZ: You don’t know if any Democrats have been down there?

MAYORKAS: Democrats have been down—

CRUZ: To see this facility? Yes or no.

MAYORKAS:---to the Donna facility. Whether they are members of this facility, I do not know.

CRUZ: Let me ask you a different question. How many women have been sexually assaulted being trafficked into this country in 2021?

MAYORKAS: Senator, I have no ability to determine---

CRUZ: So you didn’t try to find out?

MAYORKAS: assaulted in Mexico along the migratory --

CRUZ: How about this. How many children have been sexually assaulted by traffickers or other people when they were coming in illegally?

MAYORKAS: I do not have that data.

CRUZ: Okay, so you don’t know that either. Let me ask you this. How many illegal immigrants have you released into the United States who are COVID positive?

MAYORKAS: Senator, it is our policy to test individuals--

CRUZ: I didn’t ask your policy. How many illegal aliens have you released who are COVID positive?

MAYORKAS: Let me just say when they are released, they are placed in immigration—

CRUZ: How many have you released that were COVID positive?

MAYORKAS: I will have to get that number for—

CRUZ: So you don’t have that answer either. Let’s try this. How many illegal aliens have you released who had criminal convictions?

MAYORKAS: Who have criminal convictions in Mexico?

CRUZ: Criminal convictions in whatever jurisdiction.

MAYORKAS: Those individuals if they pose a public safety threat--

CRUZ: How many individuals with criminal convictions have you released?

MAYORKAS: Senator, I do not have—

CRUZ: Let’s specify it more narrowly. How many murderers have you released?

MAYORKAS: I’m not aware of any murderers—

CRUZ: How many rapists have you released?

MAYORKAS: I’m not aware of any rapists--

CRUZ: How many child molesters have you released?

MAYORKAS: I’m not aware of any child molesters whom we have released into the United States, and I should say—

CRUZ: Senior Customs and Border Patrol leadership have told me that your agency is slow walking, refusing to comply with the order from the federal court to return the Remain in Mexico policy. What would you say to the judge if the judge was asking why you should not be held in contempt and incarcerated for defying a federal court order?

MAYORKAS: It is because we are implementing the court’s order in good faith. We are working with Mexico. It requires a bilateral relationship and an agreement, and I should also add—

CRUZ: Have you or anyone on your staff expressed to Mexico to resist going back to this agreement?

MAYORKAS: No, and I should also indicate to you, Senator, that Immigration and Customs Enforcement (ICE), under the Sex Offenders operation known as SOR apprehended 495 individuals between June 4 and Sept 1st who committed sex offenses, and we’re very focused on public safety