Cruz: The Biden Administration Wants Your Electricity Bill, Heating Bill to Be Higher 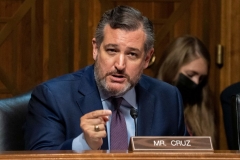 (CNSNews.com) - The Biden administration wants the American people to have higher electricity and heating bills and not to be able to fill up their cars, Sen. Ted Cruz (R-Texas) told Fox News’ “Sunday Morning Futures.”

When asked where President Biden’s Build Back Better plan is now that the infrastructure bill has passed, Cruz said, “Well, that spending plan they’re still negotiating, but I got to tell you the trillions that are being spent, the trillions in debt that's being racked up it is historic and not in a good way.

“It kind of reminds me of the television show ‘That 70s Show.’ It feels like Joe Biden's Jimmy Carter all over again, and we are seeing skyrocketing inflation. We’ve seen gas lines. We’ve seen a Middle East crisis. We have seen hostages. We’ve seen it surrender in this case in Afghanistan,” the senator said.

“All of these problems are replicating and it turns out cause-and-effect still operates that when you spend trillions of dollars, you cause inflation. You know what is stunning about that, Maria, Joe Biden and Kamala Harris and the rest of the administration don't care. You played the clip a moment ago of Jen Psaki laughing about inflation and saying, well, that's what we want,” he said.

“After spending $1.9 trillion on a so-called COVID relief bill that wasn't COVID relief, and now spending $1.2 trillion on a so-called infrastructure bill, much of which is not infrastructure, they now want to move on to Bernie Sanders’ socialist budget. This was the budget that was originally $3.5 trillion, but it was actually closer to 5.5 if you scored it honestly,” the senator said.

“Where it stands now is, they are battling with Joe Manchin and Kyrsten Sinema. They’ve got 48 Democrats ready to completely bankrupt the country and put trillions of dollars of taxes on the American people, and they have two Democrats who are saying at least tap the brakes, slowdown,” he said.

“Every Republican opposes this boondoggle because the American people are paying for it, and unfortunately, we’ll have to see if they can get 50 Democrats to agree to do substantially more damage to drive inflation up even more,” Cruz added.

The senator said that the Biden administration is intentionally being cruel to the American taxpayer when it comes to inflation, because they want to advance their green agenda.”

Well, they’re projecting that this will be the most expensive Thanksgiving we have ever had because we have seen food prices go up, but you know the hypocrisy, Maria, is striking that this administration, the cruelty is the point. They are celebrating that the cost to fill your tank, that when you go and fill your tank in your truck you're spending $100, $150.

“They’re celebrating because they think that will eventually advance their Green New Deal, their green agenda at the expense of working people. Now mind you the hypocrisy is such, it doesn't impact their life. You know John Kerry has a private jet that he helpfully explained for someone like him it’s really the only way to travel. They don't believe this nonsense.

The same thing is true with masks where they demonstrate they’re hypocrites. we saw just a week ago Chuck Schumer dancing away in Puerto Rico with no masks in sight, the same thing Barack Obama did at Martha's vineyard, same thing Nancy Pelosi did in northern California.

They are very big on rules for the little people, and they view the American people as their subjects like king George, and they don't apply the rules to themselves, and when it comes to-- I think a lot of people across this country are really having buyer’s remorse and are shocked, because this is not what Joe Biden campaigned on.

He said he was a reasonable centrist moderate. I got to admit that Joe Biden, swarming into the senate nine years ago, the Joe Biden that that a lot of us have known for a long time, we don't know where he is.

This is crazy, and I'm here to predict right now 2022 is going to be a wave election. It's going to be like 2010, Republicans will retake the House. They are going to retake the senate and the amazing thing is the crazies in the Democratic Party, their analysis of the solution to Virginia and New Jersey, they say we need more crazy. We need to go even further.

This is going to be a difficult year, but I do think we are on the path back as the American people are really unhappy with the agenda Joe Biden is pushing.

Cruz said that the 13 Republican House members who voted for the bipartisan infrastructure bill gave Biden a win, even though the Republicans had him on the ropes, and now the president can travel the country touting the progress his administration has made.

“It's exactly true, and it's maddening. I can tell you in the Senate, we spent week after week at lunch yelling at each other, with most of the Republicans saying to those who wanted to support this infrastructure bill, why are you doing it? Why are you facilitating the Bernie Sanders socialist budget? They argued no, no, if we pass this, it’ll make the other less likely to pass.

He’ll now go across the country touting look at this big bipartisan win and that additional momentum unfortunately makes it more likely that they whip their Democrats into shape and pass some multi trillion dollar spending bill on top of this that will include unfortunately trillions in new taxes. That's what the stakes are all about.

I still hope it doesn't happen, and I hope Joe Manchin does what you suggested-- what he suggested, which is to say, hey, let's kick this till next year. Let’s wait until inflation is licked, until we’ve stopped inflation. Then we can talk about the next package. I think that would show a lot of wisdom. That would be a very statesmanlike actor for Joe Manchin to do.