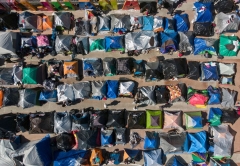 Aerial view of a migrants camp where asylum seekers wait for US authorities to allow them to start their migration process outside El Chaparral crossing port in Tijuana, Baja California state, Mexico on March 17, 2021. (Photo by GUILLERMO ARIAS/AFP via Getty Images)

(CNSNews.com) - Sen. Ted Cruz (R-Texas) is calling out the Biden administration for using the excuse of COVID to limit media access to Border Patrol facilities holding migrants on the border.

He pointed out that every administration in recent years allowed media access to border facilities, and President Joe Biden doesn’t want to public to see that he’s holding kids in cages – the same ones that were first used during the Obama administration – and that conditions are deteriorating.

“For four years, we heard Democrats going on and on about kids in cages. Well, Joe Biden desperately does not want you to see the Biden cages, and his solution is to say no cameras, no TV cameras, no media. By the way, I have been to the border many, many times, I’ve been to the border under Barack Obama. Media were allowed,” Cruz said at a press conference on Wednesday, one day before he leads a congressional delegation to the border.

Cruz also noted that despite the administration’s insistence that it’s concerned about the media spreading COVID, the facility they would be visiting is beyond capacity for holding migrants. He said that any media outlet that does not hold the Biden administration accountable for “muzzling” the media is “facilitating the media being blindfolded and gagged.”

“The risk is too high that a reporter or cameraman might have COVID, never mind that at the Donna facility, which we are going to be visiting on Friday, Donna the facility has a capacity to hold 250 detainees. There are nearly 4,000 detainees in the Donna facility right now. It is over 1500% greater than capacity,” the senator said.

“You want to talk about a COVID risk, it is the crisis and disaster that is the Biden border policy and the border crisis, but yet, the Biden administration maintains that having even a single reporter is too much of a COVID risk,” he said.

“It’s unacceptable, and I will say any media outlet that is okay with the Biden administration muzzling the press and hiding the humanitarian crisis that is unfolding, any media outlet that is not calling the president out on this right now is facilitating the media being blindfolded and gagged. That's not right for this country,” the senator added.