Cruz: Becerra ‘Never So Much as Distributed French Fries at a McDonald’s’ 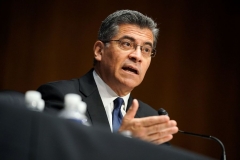 (CNSNews.com) – Sen. Ted Cruz (R-Texas) spoke out Wednesday against the confirmation of Health and Human Services nominee Xavier Becerra, saying he is “woefully unqualified to lead that department,” because he has no medical or science experience or in logistics, having “never so much as distributed French fries at a McDonald’s.”

Becerra was confirmed Thursday by a narrow margin along party lines – 50 to 49 – by the full Senate.

“There are, unfortunately, numerous nominees in the Biden administration who are either extreme or unqualified for the positions for which they have been nominated, but of all of those nominees, I believe Mr. Becerra is the single worst cabinet nominee put forward by Joe Biden to serve in the cabinet,” said Cruz, speaking on the Senate floor.

The senator pointed out that Biden has repeatedly said that his top priority is defeating the COVID-19 pandemic, yet his nominee to run HHS is a “radical left-wing trial lawyer” who has no experience in virology, pharmaceuticals, running a state or local health care agency, or logistics.

Mr. Becerra’s only qualification – and indeed the qualification that earned him this nomination – is he is a radical left-wing trial attorney.
Madam President, if a Republican president had nominated someone for HHS secretary with “zero health care experience, zero medical experience, zero pharmaceutical experience in the midst of a global pandemic, that Republican president would have been laughed out of the room.

Furthermore, he said that “all of the Democrats would have been lined up here thundering, ‘This is a president that doesn’t care about science!’”

Cruz said that if a Republican president nominated a nominee as unqualified as Becerra, “I feel confident the Democrats would have not been alone,” because “multiple Republican senators” would have stood up saying that we should have an HHS secretary who knows something about science, medicine, or pharmaceuticals.

Both had years and even decades of health care experience. As best I can tell, Madam President, Xavier Becerra’s only experience with health care is suing the Little Sisters of the Poor. Frankly, it should be a joke.

If a Republican president did this, a Republican Senate would discover the backbone to stand up and oppose it, and what I would say is sad is not a single Democrat is willing to stand up to Joe Biden and say, ‘No, try again. It’s a pandemic. Over a half million Americans have died. How about put someone in HHS that knows something about health care?’

Every senator who supports Becerra’s confirmation, Cruz said, should be prepared to answer to their constituents when they go home.

What Becerra does know about, he said, is persecuting citizens who don’t share his radical left-wing ideology,” Cruz said, pointing to Becerra’s time as attorney general of California where he “demonstrated a consistent pattern of contempt for privacy.”

“While attorney general, he used his partisan power to overcome the individual privacy rights of California. As attorney general, he demanded that thousands of registered charities annually disclose to his offices the names and addresses of major donors, even though California law didn’t require that, but he used government power to violate their right to privacy,” he said.

Instead of keeping it private for law enforcement purposes to examine irregularities, Becerra "published the information from nearly 2,000 organizations, subjecting donors and those nonprofits to harassment and abuse,” the senator said.

Cruz noted that “health care issues are personal” and sensitive.

“When you and I go to the doctor, we don’t expect our doctor to share our personal health care details with the world,” he said.

Cruz also pointed to the Supreme Court case that Becerra is involved in.

“Later this year, the United States Supreme Court will decide whether Mr. Becerra’s invasion of privacy violated the First Amendment to the Constitution while his disregard for privacy,” the senator added.

Becerra’s nomination is also concerning because of his opposition to conscience protections, Cruz said.

The next HHS secretary will be responsible for upholding the conscience protections that are written in the federal law to protect the rights of people of faith, whatever your faith, whether you’re Christian or Jewish or Muslim or whatever your faith might be, the right of professionals, of citizens under the First Amendment to live according to their faith, but Mr. Becerra, as attorney general, has aggressively defended a California law that forced pro-life groups to advertise for abortion, a law that the Supreme Court deemed unconstitutional under the 1st Amendment.

Think about that for a second. He was so radical, going after and persecuting conscience rights, he wanted pro-life groups to advertise for abortion, and it took the United States Supreme Court to strike it down and say, that is unconstitutional. Joe Biden wants him to bring the same heavy-handed zealotry to the Health and Human Services Department, and Mr. Becerra has not shown that it’s just free speech that he has antagonism to, but it is religious liberty as well.