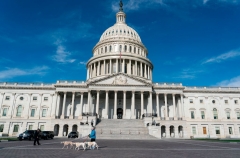 A woman walks her dogs near the US Capitol Building on March 27, 2020, in Washington, DC. - The US House of Representatives is expected to vote on a COVID-19 stimulus bill which was passed by the Senate earlier in the week. (Photo by ALEX EDELMAN/AFP via Getty Images)

(CNSNews.com) – A coalition of conservative leaders sent a letter to President Donald Trump and Senate Majority Leader Mitch McConnell (R-Ky.) warning that the congressional spending in the coronavirus must stop because it’s getting very close to $10 trillion, which is more than the government spent fighting the Revolutionary War, Civil War, and World War I and II combined.

The Save Our Country coalition, which is made up of conservative leaders, called on Trump and Republican congressional leaders to “Stop the Spending.”

During a press briefing on Tuesday, they released new budget projections showing government spending is headed to 51 percent of GDP for the first time ever. The federal government has already spent trillions in stimulus funds, and the White House and Congress are considering plans to spend at least $1 to 3 trillion more.

“Congress has already spent more than $2 trillion on CoronaVirus relief packages. The irresponsible Pelosi bill that passed the House a week ago would raise that spending total to $5 trillion, which is on top of the $4.71 trillion that Congress already authorized,” the coalition wrote in the letter.

“We are getting very close to an unthinkable $10,000,000,0000,000 (ten trillion) federal budget, which is more money in one single year than the United States government spent, adjusted for inflation ... to fight the Revolutionary War, the Civil War, World War I and World War II – combined,” they wrote.

The coalition noted that for the first time in history, “more than half of all national income would flow through the government,” when you take into account state and local expenditures.

“The inside-the-beltway crowd falsely calls these trillions of dollars a ‘stimulus’ to the economy. But government can only give money to some people, as Nobel-prize winning economist Milton Friedman taught all of us many years ago, by taking money from others,” the coalition wrote.

“Government spending – and policies such as paying millions of workers more money to stay unemployed than to go back to work, and paying states more money to enable them to stay shut down – is inhibiting the fast recovery we want in jobs and incomes, not stimulating it,” they wrote.

The coalition said that “runaway government spending is the new virus” afflicting the U.S. economy. They say that “the best way to supercharge a jobs recovery would be to repeal the payroll tax so that every working American would receive a 7.5% raise in the paycheck immediately, and every small business would see a reduction in their payroll costs of 7.5%”

“This incentivizes hiring and work. The economy desperately needs more of both of these and less debt spending,” they wrote.