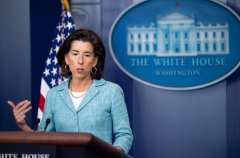 Commerce Secretary Gina Raimondo speaks during the daily press briefing on July 22, 2021, in the Brady Briefing Room of the White House in Washington, DC. (Photo by SAUL LOEB/AFP via Getty Images)

“So the president has reached out to the private sector to ask them to partner with us. The specific ask is to do everything they can to help break the log jam. That could be adding more shifts, hiring more people, coordinating better with the ports. It's really just a coordination effort so we can move cargo more quickly and meet the demands of the American consumer, she told CNN’s “New Day.”

Raimondo said the Biden administration is dealing with the shortage of truckers by training more people to become truckers, and helping people get their commercial driver’s license more easily.

“There is also a provision in the bipartisan infrastructure package to allow folks who are 18 and above instead of 21 and above to get the commercial driver's license. So we are taking action in every way that we know how, whether it is labor, opening ports 24/7, allowing flexibility for ports to use their federal money more quickly, more creatively. The president has told us his team, do what it takes, get this cargo moving because people deserve that,” she said.

As far as when people can feel relief from the supply chain backup from the actions that the Biden administration is taking, Raimondo said, “I think we will feel it a little bit each day, which is to say there is no quick fix. I wish-- if there were a light switch we could flick, we would do that. You are already starting to see some relief.

“You were talking earlier about chips for example. I’ve been talking to automakers. They’re saying it is a little bit better. The ports are moving a bit more quickly. So, you know, we all have to be just a little bit patient because we are seeing that the action we are taking is working. We just have to stick with it, you know, long enough to solve the problem,” she said.

On the issue of using the National Guard to drive trucks, the secretary said that “everything is on the table” and it’s a tool the administration would consider if it thought it would be helpful.

“We are literally going through our entire toolbox to decide what steps would be helpful. You know, I don't think it's something that we are seriously evaluating right now, but, listen, we are in touch with governors every day asking them how can we help you. and, you know, the National Guard is a tool that we would consider if we thought it would be helpful,” she said.

“As you say, this is not in my area. I know that Secretary Granholm, secretary of energy, is working this issue and monitoring it constantly, and, again, as you say, this is in the private sector, but I will say we will take similar actions as necessary in terms of partnering with the private sector. At this point we aren't, you know -- we are watching it on a daily basis, and we will take action as necessary,” Raimondo said.

Berman asked if Raimondo were still governor of Rhode Island would she be asking President Biden to open up the Strategic Petroleum Reserve.

“Again, I think it's premature to say. What I would be saying to the president is I would just ask him to keep doing what he's doing, which is to say waking up every single day, worrying about these issues and directing his team to do everything they can within the power of the federal government in partnership with governors, in partnership with the private sector to fix these problems,” she said.

The secretary said that during the pandemic the entire global supply chain was shut down, and it will take some time to restart it.

“I think we’ve never lived through anything like COVID before. We shut down our entire global supply chain. You know, overnight, literally, in 2020, and so -- and now we have to turn it back on, global supply chains. It is going to take a little bit of time, but we are making progress every single day,” Raimondo said.

“You see it. Lumber prices are down 60% since may. We just got rid of tariffs on steel and aluminum. You'll start to see those prices go down. The ports are moving a little bit more quickly. So we' are on it, acting urgently and we know it is a tough time for American consumers,” she said.