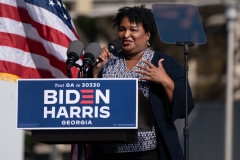 Former US Representative and voting rights activist Stacey Abrams speaks at a Get Out the Vote rally with former US President Barack Obama as he campaigns for Democratic presidential candidate former Vice President Joe Biden on November 2, 2020, in Atlanta, Georgia. (Photo by ELIJAH NOUVELAGE/AFP via Getty Images)

(CNSNews.com) – CNN’s Jake Tapper corrected Stacey Abrams on Sunday for claiming that “voter fraud did not happen” in the 2020 elections, saying that he knew of “at least two or three Trump voters in Pennsylvania who voted for their dead parents.”

“We shouldn't say there's no fraud. There's no significant fraud, but there obviously has been some fraud here and there. I know of at least two or three Trump voters in Pennsylvania who voted for their dead parents. So, there has been some fraud, just not anything that would change the course of the election,” he said.

During an interview on CNN’s “State of the Union,” Abrams, founder of Fair Fight, criticized Arizona Republican State Representative John Kavanagh, who told CNN, “There's a fundamental difference between Democrats and Republicans. Democrats value as many people as possible voting, and they're willing to risk fraud. Republicans are more concerned about fraud. So, we don't mind putting security measures in that won't let everybody vote, but everybody shouldn't be voting.”

“Well, my reaction when I hear that from any American is that I'm fundamentally disappointed that they misunderstand our democracy,” Abrams said.

“Our system of government demands active participation from citizens to direct the future of our nation, and we should be deeply disappointed in anyone, any American citizen, and certainly anyone who took the oath of office who seeks to restrict access to the right to vote, and uses this false predicate of fraud, which we have seen disproven in multiple courts and by the Supreme Court, as well as by the governors and secretaries of state in almost every state,” she said.

“That was the fundamental premise of this nation, and that's why H.R.1., S.R.1, and H.R.4 are such essential pieces of legislation, because, whether it's happening in Georgia, in Arizona, in Pennsylvania, in Kansas, in Iowa, where voter suppression is rearing its head yet again, it is our responsibility to ensure that, no matter where you live in the United States of America, the right to vote and the access to that vote is protected,” Abrams said.

“When you tell Americans that their right to vote has to be determined by whether or not the party in power thinks that they should be heard, we are completely reversing our course, the progress we have made becoming a more democratic society. This is not about any individual politician. It's about the right of the people to be heard,” she said.

“We just watched the American Rescue Plan pass, where we're going to lift half of the people in poverty out of poverty. In the state of Georgia alone, 88 percent of Georgians and 88 percent of Georgia's children will receive funding, and we will lift 171,000 children out of poverty. It should be anathema to us in the United States that we would allow anyone to deny the right to vote to any American, so we can choose the direction of this country,” Abrams added.