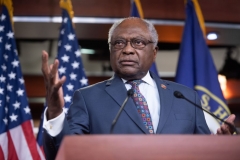 (CNSNews.com) – House Majority Whip James Clyburn (D-S.C.) said Wednesday that he doesn’t want to see statues torn down and that “nobody is talking about destroying statues.”

Instead, he said, statues honoring Confederate soldiers and the like should be placed in a museum.

Clyburn spoke at a press conference of House Democrats calling for the removal of statues of people who supported slavery from the U.S. Capitol building.

“Nobody is talking about destroying statues. I do not believe that we ought to—no matter how ill-fated it may be, I do not advocate and don’t want anybody tearing down any statues. I want them put in their proper perspective, as Steny, just mentioned. Put them in a museum. The ones here in the Capitol, this legislation calls for removing them from a place of honor and putting them maybe over in some museum until the states that sent them up here, and including my state, can come and get them,” he said.

“Defenders and purveyors of sedition, slavery, segregation, and white supremacy have no place in this temple of liberty. That’s why we introduced H.R. 7573,” Hoyer said at the press conference.

He called it “a long, overdue and historic step to ensure that individuals we honor in our Capitol represent our nation’s highest ideals and not the worst in its history.”

“It’s time to sweep away the last vestiges of Jim Crow and the dehumanizing of individuals because of the color of their skin that intruded for too long on the sacred spaces of our democracy,” Hoyer said.

Clyburn reminisced about seeing Confederate battle flags on the cars of people who rode through his neighborhood when he was a kid.

“I remember when my parents first got the unfettered right to vote. I remember what it meant to them to get that vote. I remember watching Confederate battle flags on automobiles parading through my neighborhood when I was growing up. I remember how it struck fear in us schoolchildren, afraid to go out and play because of what was called the Night Riders, and that flag was their symbol,” he said.

“I know after going off and studying history, and for me to study about the Holocaust and what it meant in Germany and for Germany to outlaw the swastika and for the haters of Germany to pick up the Confederate battle flag to replace it. And if you cannot understand what that symbolizes, then something is kind of wrong with you, and so we know what the Confederate battle flag symbolizes,” Clyburn said.

“And so when people say these are symbols of heritage and not hate, I say to them: hate is a heritage, depending on what side of history you’re on,” the congressman said.

Rep. Karen Bass (D-Calif.), chairwoman of the Congressional Black Caucus, suggesting placing the statues in a section of the Capitol building once used as a jail.

“I’m proud to join my colleagues today to introduce this bill that not only removes the bust of Chief Justice Rob Taney, but of all the other statues of the defenders of slavery and segregation located in the U.S. Capitol,” she said.

“I have heard that somewhere in the Capitol there’s a jail people were put in at one point in time, and maybe that would be a proper location for these statues,” Bass said.

“As the world watches the United States during this moral moment, we must be a reflection of the leadership that we project globally. It is a time to replace the monuments of oppression with the monuments of liberty,” she concluded.