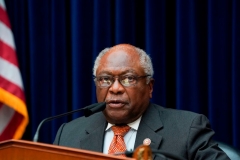 (CNSNews.com) – Rep. Jim Clyburn (D-S.C.) told NBC’s “Meet the Press” on Sunday that he believes the defund the police movement is what cost Jaime Harrison the election in his bid to unseat Sen. Lindsey Graham (R-S.C.).

Host Chuck Todd asked Clyburn whether Spanberger’s right and whether it cost the Democrats House seats.

“Well, I don’t know about all the seats. I’ve talked to the people down in South Florida. They told me that that really, really was a problem down there, but I can tell you about the 1st congressional district of South Carolina. I really believe that that's what cost Joe Cunningham his seat, and I can also tell you about the Senate here in South Carolina,” Clyburn said.

“Jaime Harrison started to plateau when ‘defund the police’ showed up with a caption on TV, ran across his head. That stuff hurt Jaime, and that's why I spoke out against it a long time ago. I've always said that these headlines can kill a political effort. We are all about making headway, and I just hope that going forward we will think about each one of these congressional districts and let people represent their districts,” he said.

“You know, Joe Cunningham could not get elected in my district, and I can't get elected in his. So let's recognize that the people should reflect that diversity in our country,” Clyburn added.

“Let me get you to respond to something that Congresswoman Alexandria Ocasio-Cortez said in an interview this weekend. She said, ‘The last two years have been pretty hostile. Externally, we’ve been winning. Externally, there’s been a ton of support, but internally, it’s been extremely hostile to anything that even smells progressive.’ That was about how things have worked inside, inside the Democratic Congress. How would you respond to her?” Todd asked.

“Well, you know, sometimes I have real problems trying to figure out what progressive means. You know, I tell people all the time, my father was very conservative. He was a minister. I never heard him ask his congregation to give conservatively. He always asked for a liberal offering, and so I believe that it’s good to be conservative at times and in many ways, but it’s also good to be liberal at times, in many ways, and so you have to balance all of this out,” Clyburn said.

“Now, some people refer to me as being moderate, I’ve been called conservative, and I’ve been called a flaming liberal. What would we call John Lewis? You know, anytime you challenge the status quo, you are looked upon as being liberal. No, you just want to be a part of what's going on in this great country, a country that you’ve helped to make great, and that’s all this is,” he said.

“So I don't, I don’t get hung up on labels, so I don’t know what I am. I'm an American, a very proud American, and I’m a Democrat, a very proud Democrat. So I just want us to be Democrats in a big tent, and these labels, I don’t -- I reject,” Clyburn said.

Todd asked Clyburn to comment on Sen. Mitt Romney’s (R-Utah) comment that the election was a referendum on a person and that’s why President Donald Trump lost, but it wasn’t a referendum on policy directly, because that’s why Republicans did better than expected down the ballot.

“Well, I think he is, in part, right about that, but I think you ought to take a look at Georgia. I said before the election that the state that I would focus on to see what is happening in Georgia, and some great things are happening in Georgia to demonstrate that it was not just about the person but about some philosophies going forward,” Clyburn said.

“And so I think that's why you got the kind of, of vote in suburban areas around Atlanta. If you all look back to the primary, you'll see that Joe Biden was picking up votes in South Carolina, in areas where Democrats had not been getting votes before. So, he's right about the country being much more, if we use the term, cautious, than we expected it to be,” he said.

“So, I'm not upset about the results - a little bit disappointed that we lost seats - but I also recognize -- look back two years, and see where we picked up seats in the House. We knew going in this was going to be tough, to hold many of those seats, and so we just saw the -- and we’ll see what happens going forward,” the congressman said.