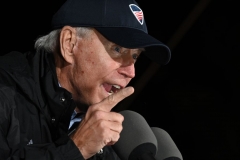 Democratic Presidential Candidate Joe Biden speaks during a drive-in rally in Philadelphia, Pennsylvania on November 1, 2020, to mobilize the community in support of the Biden-Harris ticket with less than 48 hours until polls open on Election Day. (Photo by JIM WATSON/AFP via Getty Images)

(CNSNews.com) – Former New Jersey Gov. Chris Christie told ABC’s “This Week with George Stephanopolous” on Sunday that former Vice President Joe Biden has a decision to make if he wins the presidential election: unite America or united the Democratic Party.

“If he decides that he really wants to be what he has said in the campaign, which is -- I’m a proud Democrat, but I’ll govern as an American president - what he needs to do is reach out to Republicans and independents with his policies, not with his rhetoric, but with his policies. And that’s going to be the challenge for him,” he said.

Christie said that if President Donald Trump is re-elected on Tuesday, “he's got to be is the happier warrior he has been in the last week or so.”

“He has to talk to the country finally. We’ve been about this for months about what the second term is going to look like and give people hope,” Christie said.

“He didn't really do that in the campaign,” host George Stephanopolous said.

“He did not, as I’ve been talking about sitting next to you for months,” Christie said.

Former DNC Chair Donna Brazile argued that “the Democratic Party is united, and we achieved that before the convention.”

“And thanks to all of the 24 candidates that submitted their names to run last year. The party is united. I think Joe Biden is going to keep his word to unite the country, to bring the country together, to heal these divisions and to be an American president once again,” she said.

“I want to say to all of those Republicans who have been just getting on board, who have helped the Democratic Party, who have helped us get our message out, thank you, and you have a seat at this table, and you don't have to worry about a folding chair, but here's my prediction. We're going to see more women in the United States Congress, period,” Brazile said.

She predicted that there will be “more people of color, black and Latinos and Asian American and openly gay Americans serving in the Congress.”