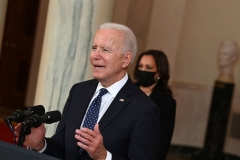 (CNSNews.com) – President Joe Biden broke his promise of returning bipartisanship to Washington, which comes as no surprise to former Rep. Jason Chaffetz (R-Utah), because he said Biden didn’t unite people throughout his entire time in the Senate.

“At this point, I mean, the whole promise of Joe Biden, he was going to return us to this point where we were actually going to work together, and he was going to reach across the aisle and find bipartisan solutions but in the first 100 days, I mean, can you find a single thing? He makes Donald Trump look like the most bipartisan president we have had in generations,” Chaffetz told Fox Business’s “Mornings with Maria Bartiromo” on Friday.

“But Joe Biden's promise of bringing people and uniting people is a fallacy, and he's never done it throughout his history of his time in the Senate. I don't know why we thought he was going to do it now, but that was the story that Joe Biden and Kamala Harris put together for the campaign, and I think America liked it. The problem is, they just never do it,” he said.

The former congressman said he doesn’t see the D.C. statehood bill getting through the Senate even though it was passed in the House on Thursday.

“I don't. They tried this in 2009. They passed it in the House, but the Senate didn't take it up. The root of this is whether or not they can override the filibuster, which they can't, unless they change the rules, but if they ever change the filibuster, they're going to pack the courts. They’re gonna add D.C. statehood, probably Puerto Rico, some others along the way,” he said.

He said the fear is that by getting rid of the filibuster, Democrats will be able to break cloture, which requires 60 votes.

“Yeah. That is the fear, is that by rolling through the filibuster -- normally through what's called -- they have to get to a 60 vote threshold in order to break cloture and be able to move on and look at a bill. Unlike the House, the Senate can only take up one issue at a time, and so they have to reach that threshold,” Chaffetz said.

“That's why so few bills go through the process, but they have threatened to block – to override that filibuster, but you're right, Kyrsten Sinema out of Arizona and Mr. Manchin there, Senator Manchin have been the two that have held the line and the Senate tradition that has been there for more than 100 years,” he said.

Bartiromo pointed out that the liberal news outlets like Politico have instructed its employees not to use the word “crisis” when describing the situation at the southwest border.

“It's further proof that the media is hand in glove with the radical far left agenda, and there's some legal reasons why they're trying not to call it a crisis. I think they're afraid of some injunctive relief, as the states you sue the federal government,” the former congressman said.

“This goes back to the Obama-Biden administration where they changed the definition of credible fear, and they did so unilaterally without legislation. That changed the scope on which people could claim asylum,” Chaffetz said.

“Donald Trump fixed all this and was plugging the border and had a good policy in place, and of course as soon as Biden and Harris get there, they reverse that, but they're afraid of this injunctive relief if it is a crisis and the states can argue, hey, listen, we have to fix this and fix it immediately, because you can't unilaterally change the definition of credible fear, which obviously it started in Obama, and Biden has continued,” he said.

Bartiromo said the media is playing up the Democrats’ tax increase plan as if it’s just going to affect the top one percent. She said everyone will see their taxes go up.

“That's exactly right. Every single person in this country will get a tax increase, and they've done so in part because of the inflation, which is so cruel to lower incomes, but they're also -- I mean, they are -- it's almost as if they don't want the economy to succeed because it was moving -- look what they did in the energy sector,” Chaffetz said.

“I mean, prices -- if you're on a fixed income, if you’re having to commute to work and the energy prices go up radically, that harms you. It's a tax unto itself. But the actual taxes – let’s remember what Bernie Sanders said about Joe Biden. He will be the most progressive president in the history of the United States, and in the 1st 100 days that's exactly what he’s doing,” he said.