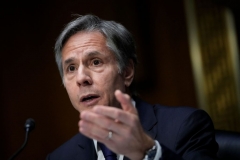 (CNSNews.com) – Secretary of State Antony Blinken admitted on Tuesday that the Biden administration is reviewing whether the U.S. military killed an aide worker or an ISIS-K terrorist in the drone strike in Afghanistan in retaliation for the murders of 13 U.S. military members.

During a Senate Foreign Relations Committee hearing, Sen. Rand Paul (R-Ky.) questioned Blinken on the identity of the person killed in that strike. He also questioned why the U.S. gave millions of dollars in aid to charity groups in Afghanistan, knowing it could fall into Taliban hands.

PAUL: I have advocated for an end to the Afghan war for over a decade. I'm glad it's finally over. But never in my worst nightmares could I have imagined that an administration would leave and leave $80 billion worth of weaponry to the Taliban, dozens of planes and helicopters, thousands of armored carriers, hundreds of thousands of automatic weapons, and worst of all, 13 of our brave young and women. Never in my worst nightmares did anyone conceive of such a colossal incompetence.

To add insult to injury this week you’ve now released $64 million in aid to Afghanistan. Don't we have some prohibition against giving aid and comfort to the enemy? Now the argument from the Biden administration is, oh, we're giving it to charities, and it’s for the good of the people, for poor people and women. The Taliban has a history of taking this. Throughout their governance, they would take the money.

This was a big complaint we had when they were in power the last time. They now have $80 billion worth of weapons - 350,000 automatic weapons. Do we really, are we really naive enough to believe that we're just going to keep sending charity to Afghanistan, and they're not going to interrupt it?  I think that's a foolish notion. The $64 million though is the tip of the iceberg.

There's still about $10 billion out there that was designated for the Afghan government. Can you pledge today without equivocation that the Biden administration will not release any of this money to the Taliban?

BLINKEN: Absent the Taliban, making good on the commitments and expectations of the international community that I’ve outlined previously, that's correct.

PAUL: Maybe we can deduct a fee for the weapons they took.

BLINKEN: So Senator, on the weapons, again, I'll defer to my colleagues at the Pentagon who are more expert at this. You're right that about $80 billion worth of weaponry has been provided over the course of the last 15 or 16 years. Much of that, the significant weaponry - planes, helicopters – is actually inoperable, will soon become inoperable because it can't be maintained. In terms of the strategic threat that that weaponry poses, it doesn't to us or to Afghanistan—

We've sunk trillions of dollars over there. This is our chance to have a peace dividend Let's stop sending good money after bad. The guy, the Biden administration, droned, was he an aid worker or an ISIS operative?

BLINKEN: The administration is of course reviewing that strike, and I'm sure that a full assessment will be done.

PAUL: You don't know if it was an aid worker or an ISIS-K operative?

PAUL: So you don’t know or won’t tell us?

BLINKEN: I don't know because we’re reviewing it.

PAUL: Well see, you’d think you'd kind of know before you off somebody with a drone whether he’s an aid worker or an ISIS-K. See the thing is, is this isn't just you. It's been going on for administration to administration. The Obama administration droned hundreds and hundreds of people, and the thing is there is blowback to that.
I mean I don’t know if it’s true, but I see these pictures of these beautiful children that were killed in the attack. If that's true and not propaganda, if that's true, guess what?

We've got plenty of bombs. We can bomb almost anything we want from anywhere in the world. Maybe we should have bombed the helicopters and the planes that we left behind. Even though you said you didn't know any of this and was all surprised, once they took our stuff, we should have said you got 20 minutes to get out of it because we're going to blow it all up.

Then you would have sent a message of strength. Instead we bomb somebody who we're not sure was an aid worker or an ISIS-K operative. See that's not sending a signal of strength, and in the end, there will be more blow back from it. If you killed an aid worker on accident? I mean, do you think we're better off because of that?

You really could have acted in a position of strength but you could have made the basic decision, the basic fundamental decision that really ruined the whole thing for you was a military decision to abandon Bagram Air Force Base before you left, before the Americans were out. Anybody can argue, and you may have a point that it happened more quickly than we thought it was going to happen.

Okay. That's an honest mistake, still a huge mistake, and when people make judgments, mistakes in the military, they ought to be relieved of their post, but leaving Bagram Air Force Base I think is an unforgiveable sort of mistake. It’s going to be remembered in history, but if you do nothing about it, you leave all these people in place, and say, oh, well, we all agreed.

It’s like well maybe everybody needs to go. I mean, but really, it was a terrible mistake, but releasing money to the Taliban will add insult to injury. It will be terrible for the memory of the 13 soldiers who died in the end who were the final soldiers to die in this war if you end up giving money to the people that have been ruining the Middle East and Afghanistan for decades. I hope you won't release the money, and I think it’ll be a big mistake.