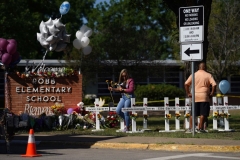 People drop off flowers at a makeshift memorial outside the Robb Elementary School on May 26, 2022 in Uvalde, Texas. (Photo by ALLISON DINNER/AFP via Getty Images)

(CNSNews.com) - The Bipartisan Background Checks Act (HR 8), which Democrats are demanding that the Senate pass, would not have stopped the Uvalde school shooter from purchasing weapons, said Rep. Tony Gonzales (R-Texas), who represents Uvalde, Texas.

Gonzales told Fox News’ “America Reports” that “it gets to politics real quickly” whenever there’s a mass shooting, “and right now Democrats are pushing HR8, and HR8 passed in the House. It stalled in the Senate.”

“If that bill were to pass - let's say it passed a year ago, passed in the House and were to pass in the Senate and the president would have signed it into law, that bill would not have prevented the Uvalde shooting from occurring. What I’m getting at is you have these politicians that push this narrative that say pass my bill and I'll save lives,” he said.

When asked what’s the solution to keeping guns out of the hands of the mentally ill, Gonzales said, “Step one, identifying the people who are mentally ill. I mean, this guy -- you know, you ask everybody that interacted with him, they’re not surprised that he was the shooter. We have to get ahead of this, not wait til the day of. He had been planning this for a long time.

Gonzales said that Uvalde is still in a state of shock that’s starting to wear off, and reality is starting to set in.

“You are going to see the emotions go from shock to anger, and we have every right to be angry because we were tired of the Inaction. We are tired of the politics that come in and swoop in and try to swing this one way or another. This is about how do we solve this problem going forward. You know, the minute that gunman entered the school, deaths were destined to occur,” he said.

The congressman said that from the briefings he’s gotten and the conversations he’s had with law enforcement officers, the police “were initially contacted when there was an accident at the school, when the person dumped, when the shooter dumped his car and went in, and he went into the first class that he saw, and as soon as he went in he immediately started murdering innocent children and it wasn’t until the initial force contacted him, engaged him, that he stopped and basically was barricaded in place.”

“People like Lt. Javier Martinez who took fire and also was injured, they saved hundreds of lives. They are heroes walking among us. We’re going to talk about the victims. We absolutely should, also need to talk about the survivors and the heroes of this crisis,” Gonzales said.

As CNSNews.com reported, Uvalde parents were seen screaming at the police to storm the elementary school and rescue the kids. When asked about it, the congressman said, “I'm a father of six and this hits home, and you know, take my congressman hat off and put my father hat on, which is always on. You know, of course you would storm in there. Of course you would want to save your children.

“I have folks that work for me, Regina is one of our staffers, and she was a concerned parent trying to get her child into safety. What I'll say is from the reports I've gotten, from the conversations I've had, it was a mix of different law enforcement officers that were able to ultimately neutralize this assailant from killing more people, and it was Border Patrol agents, it was local Uvalde Police Department, sheriffs, it was folks that weren’t even from this county,” he said.

“You have to remember, law enforcement, these are our kids. So if you get a call and it's your child's school, there was a deputy that -- his wife and his daughter went to the school that responded. So law enforcement responded as quickly as possible,” the congressman said.

“I would say due to that response, there were lives that were saved, and as soon as this gunman entered that building and entered that classroom, there was -- he had one intent and that was to murder innocent children,” Gonzales said.

When asked what the level of engagement was with the shooter outside the school, the congressman said, “I was told that no one knew that it was an active shooter event until he entered that building, that prior to that, it was a car accident that was -- that happened at the school. That was the initial alert report outside of what he had done at his home and the 911 call.”

He said that means there was never an exchange of gunfire with the school police officer outside of the school.

“I've been told there was no gunfire outside. All the interaction happened inside the school. Now, when they said, you know, there was initial interaction, we'll see what the report kind of ultimately ends up with. I think that part of it was there was an accident at the school and then people started responding to that, which quickly turned into an active shooter situation,” the congressman said.