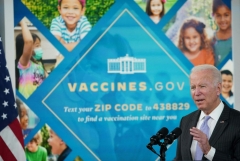 President Joe Biden speaks on the authorization of the Covid-19 vaccine for children aged 5 to 11 in the South Court Auditorium, next to the White House, in Washington, DC on November 3, 2021. (Photo by MANDEL NGAN/AFP via Getty Images)

(CNSNews.com) – President Joe Biden explained Terry McAuliffe’s loss in Virginia by saying that no gubernatorial candidate in Virginia has ever won when he’s of the same party as the president, and he doubled down on the need to pass his $1.75 trillion reconciliation spending bill.

However, when McAuliffe was elected governor of Virginia in 2013, Democrat Barack Obama was the sitting president.

During a press conference on COVID-19 vaccines for kids age 5 to 11, NBC White House Correspondent Kristin Welker asked, “As a leader is the Democratic Party, how much responsibility do you take for the results in Virginia?”

BIDEN: Yesterday reminded me that one of the sacred rights we have is to be able to go out and cast our votes and remember that we all have an obligation to accept the legitimacy of these elections. I was talking to Terry to congratulate him today. He got 600,000 more votes than any Democrat ever has gotten. We brought out every Democrat that there was, more votes than ever had been cast for a democratic incumbent. Not incumbent Democrat running for governor, and no governor in Virginia has ever won when he’s of the same-- whether he or she is of the same party as a sitting president.

What I do know is that the people want us to get things done. They want us to get things done. That’s why I’m continuing to push very hard for the Democratic Party to move along and pass my infrastructure bill and my Build back better bill. Think about what we’re talking about here. People are upset and uncertain about a lot of things from COVID to school to jobs to a whole range of things and the cost of a gallon gasoline and so if I'm able to pass, sign into law it my Build Back Better initiative, I’m in a position where you’re going to see a lot of those things ameliorated quickly and swiftly.

WELKER: Do you take responsibility and do you think Terry McAuliffe would've won if your agenda had passed before election day?

BIDEN: I think it should have passed before Election day, but I'm not sure that I would be able to have changed the number of very conservative folks who turned out in the red districts who were Trump voters, but maybe, maybe.

WELKER: But you won the state by 10 points.

BIDEN: I know we did, but also I was running against Donald Trump.

“I think we should produce for the American people. Look. One of the things that is important to understand is that if they pass my legislation, we’re going to be able to reduce the price -- people are going to see a reduction in the price of the drugs they have to get because Medicare will be able to negotiate and lower the price of drugs. If they pass my legislation, you're going to see that nobody, and some of you who have children in day care or children in child care, you’re paying up to $14,000 a year if you live here. You will never have to pay that much money if you live in Washington or wherever you live. Not more than 7% of your income. You're going to see that they’ll get tax breaks, genuine tax breaks,” Biden said.

A phone rang interrupting the president, and he said, “If that's Donald Trump, tell him I’m busy. Bad joke, but anyway, but the point is, we have to move and make it clear that we’ve done is increasing -- people need a little breathing room. They’re are overwhelmed and what happened was I think we have to just produce results for them to change their standard of living and give them a little more breathing room.

"What do you say to voters especially black voters who see Republicans running on race, education, lying about critical race theory and they’re worried that Democrats don’t have an effective way to push back on that?" Alcindor asked.

"Look, I just think that people are at a point, and it’s understandable, where there's a whole lot of confusion everything from are you ever going to get COVID under control to are my kids ever going to be in school? Are they going to be able to stay in school? To whether or not I’m going to get a tax break so I can pay for my kids in my family? They are all things that I'm running on, we’ll run on, and I think we’ll do fine," Biden added.