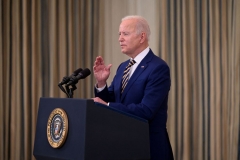 President Joe Biden speaks about the Covid-19 response and the vaccination program in the State Dining Room of the White House in Washington, DC, on June 18, 2021. (Photo by JIM WATSON/AFP via Getty Images)

(CNSNews.com) – President Joe Biden said Friday that he doesn’t think the U.S. Conference of Catholic Bishops will deny him Communion based on his support for abortion.

After announcing that 300 million COVID-19 vaccines have been administered in the first 150 days of his presidency, Biden was asked by a reporter whether he’s concerned about the “rift within the Catholic Church” and the U.S. Conference of Catholic Bishops moving on a resolution to deny him and other Democratic politicians who support abortion from receiving Communion.

“That’s a private matter, and I don’t think that’s going to happen,” he said.

On Thursday, U.S. Catholic bishops voted 168 to 55 in favor of establishing guidelines on the meaning of Holy Communion. The move is seen as a move towards denying Biden communion.

“As a result of the vote, the USCCB’s doctrine committee will draft a statement on the meaning of Communion in the life of the church that will be submitted for consideration at a future meeting, probably an in-person gathering in November. To be formally adopted, the document would need support of two-thirds of the bishops,” the Associated Press reported.

“One section of the document is intended to include a specific admonition to Catholic politicians and other public figures who disobey church teaching on abortion and other core doctrinal issues,” according to the AP.