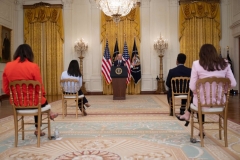 President Joe Biden speaks during his first press briefing in the East Room of the White House in Washington, DC, on March 25, 2021. (Photo by JIM WATSON/AFP via Getty Images)

(CNSNews.com) – When asked whether he moved too quickly in rolling back former President Donald Trump’s executive orders on immigration, President Joe Biden was unapologetic, saying that Trump’s policies were not helping and “did not slow up the amount of immigration.”

Biden accused the Trump administration of leaving migrant children stranded in the mud “on the edge of the Rio Grande … with not enough to eat.”

NBC News White House Correspondent Kristen Welker asked, “Do you bear responsibility for everything happening at the border now. I hear you talking now about the past administration. You decided to roll back some of those policies. Did you move too quickly?”

BIDEN: To rollback what, I'm sorry?

WELKER: Did you move too quickly to roll back some of the executive orders of your predecessor?

BIDEN: First of all, all of the policies that were underway were not helping at all, did not slow up the amount of immigration, as many people coming and rolling back the policies of separating children from their mothers?

Welker also asked whether the president would “commit to allowing journalists to have access to the facilities that are overcrowded going forward.”

BIDEN: I will commit when my plan, very shortly, is underway to let you have access to not just them but to other facilities as well.

WELKER: How soon will journalists be able to have access to the facilities? We’ve obviously allowed inside one, but we haven't seen the facilities in which children are packed together to really give the American people a chance to see that. Will you commit to transparency on this issue?

BIDEN: I will commit to transparency and as soon as I am in a decision to be able to implement what we are doing right now. One of the reasons I haven't gone down, I have all my chief folks have gone down, is I don't want to become the issue. I don't want to be bringing all the Secret Service and everybody with me to get in the way. So this is being set up and you’ll have full access to everything once we get this thing moving.

WELKER: Just to be clear, how soon will that be?

As CNSNews.com reported, Biden plans to use Fort Bliss – which has a 5,000-bed capacity - to house unaccompanied minors on the Texas border.