Biden, Touring Flood Damage in Ky.: ‘The Weather May Be Beyond Our Control for Now’ 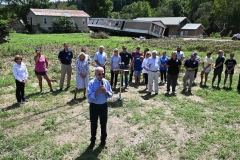 President Joe (C) speaks after meeting with a family who lost their home to flood waters in Lost Creek, Kentucky, on August 8, 2022. (Photo by JIM WATSON/AFP via Getty Images)

(CNSNews.com) – While touring the damage from flooding in Eastern Kentucky on Monday, President Joe Biden said that “the weather is beyond our control for now.”

The president told the story of one property owner he spoke to who said that “Kentuckians don’t want to ask for too much.”

I said, ‘You’re kidding me.’ No seriously. What’s he talking about? And to point it out that, here’s the deal. It is true that the people here in this community, in western Kentucky and the folks I met with the tornado, they’re not just Kentuckians, they’re Americans. They’re Americans. This happened in America, American problem, and we’re all Americans. Everybody has an obligation to help. We have the capacity to do this.

We’ve never done this before, but because of a number of things we got done a bipartisan basis like $1.2 billion infrastructure project, like what we’re doing today—we passed yesterday having taken care of everything from health care to God knows what else. What we’re gonna do is we’re gonna see – for example, they gotta put a new water line in, in the community. There’s no reason why they can’t at the same time be digging a line that puts in a whole new modern line for internet connections. Why? Why can’t we do that?