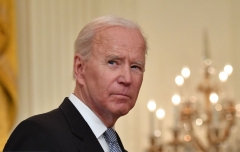 President Joe Biden delivers remarks on the COVID-19 response and the vaccination in the East Room at the White House in Washington, DC on May 17, 2021. (Photo by NICHOLAS KAMM/AFP via Getty Images)

Biden noted that violent crime usually spikes in the summertime, and with schools closed, for teenagers “who are in tough neighborhoods,” no jobs means more trouble.

“We know summer job training — summer jobs, training, and recreation for young people work. They help make sure young people pick up a paycheck instead of a pistol. One study found a Boston summer jobs program for youth reduction reduced violent crimes by 35 percent in Boston,” he said.

“Another study found that a program that offers high school students in Chicago a good summer job and an adult mentor and behavioral therapy led to a 45 percent drop in violence,” the president said.

“We can invest in more of these programs with the American Rescue Plan, and here’s another thing states, cities, counties, and tribes can do with that funding: When someone finishes their time in prison, they can’t just give them — we can’t just continue to give them 25 bucks and a bus ticket,” Biden said.

“They end up right back where they started and got them in trouble in the first place — or no option for being able to provide for access to public housing or for schools or for — for mentors to help them find their way, and the stuff that prevents recidivism and helps them integrate in a society. That’s changing with guidance we’re issuing today,” he said.

“The American Rescue Plan funding can help formerly incarcerated people get skills training, apprenticeships, and work experience so they can gain stability and security and a chance for a better life, rather than going back to exactly what they left,” the president added.

“Well, first, there’s several components of this proposal. One of them is an initial set of actions on gun violence — or an additional set, I should say, of steps on gun violence, which the president feels are important to get guns off the streets, make sure they are not in the hands of people illegally, many of whom are playing a role in violent crime across the country. That’s part of his objective,” Psaki said.

“So is the thought there basically that somebody — some criminal who has been committing crimes with limited interruption or interference from police for the last couple of weeks or months is going to stop this easy life of crime if they have a summer job?” Doocy asked.

“Well, I think the president believes that we shouldn’t — we shouldn’t allow access to guns to those criminals who are currently illegally buying them from some dealers across the country, and part of his announcement is taking steps to do exactly that,” Psaki said.

“But part of his announcement is also ensuring there’s specific guidance to communities across the country to ensure that they have funding to get more community police around the country, something that was supported by the American Jobs Plan, that was support- — that was voted into law by Democrats just a couple of months ago. Some might say that the other party was for defunding the police; I’ll let others say that, but that’s a piece,” she said.