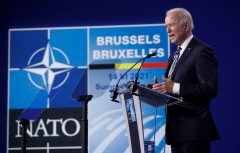 President Joe Biden gives a press conference after the NATO summit at the North Atlantic Treaty Organization (NATO) headquarters in Brussels, on June 14, 2021. (Photo by OLIVIER HOSLET/POOL/AFP via Getty Images)

(CNSNews.com) - President Joe Biden announced Thursday that he is sanctioning “more than 400 individuals and entities in alignment with the European Union” and “more than 300 members of the Duma, oligarchs and Russian defense companies that fuel the Russian war machine,” while at the same time he admitted that sanctions won’t deter Russian President Vladimir Putin.

“Sir, deterrents didn’t work. What makes you think Vladimir Putin will alter course based on the action you've taken today?” a reporter for CBS asked Biden during a press conference in Brussels, Belgium.

Biden said that sanctions alone won’t deter Putin, but “increasing the pain” of sanctions and making sure they are prolonged “for the remainder of this entire year” is what will stop him.

“Do you believe the actions today will have an impact on making Russia change course in Ukraine?” the reporter asked.

“That's not what I said. You’re playing a game with me. The answer is no. I think what happens is we have to demonstrate -- the purpose — the single most important thing is for us to stay unified and the world continue to focus on what a brute this guy is and all the innocent people's lives are being lost and ruined and what's going on,” Biden said.

“That’s the important thing, but look, if you are Putin and you think that the– that Europe is going to crack in a month or six weeks or two months, why not -- they can take anything for another month, but we have to demonstrate. The reason I asked for the meeting, we have to stay fully, totally, thoroughly united,” he said.