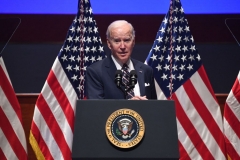 President Joe Biden speaks at the 70th National Prayer Breakfast at the US Capitol in Washington, DC, on February 3, 2022. (Photo by SAUL LOEB/AFP via Getty Images)

(CNSNews.com) – President Joe Biden referred to blacks as “colored” during a speech at the National Prayer Breakfast on Thursday during Black History Month.

Biden was telling the story of seeing “colored kids” on a bus when he moved from Scranton, Pa., to Claymont, Dela.

“I remember going to a little Catholic grade school in Claymont, Delaware, which is a steel town that was dying, and the bus would --- my mother would drive me to the school parking lot. It’s called Holy Rosary School from a little—it was called Brookview Apartments, used to be Section 8 housing later, and I got out of the bus-- I got out of the car, and that’s where I-95 runs parallel to these days,” the president said.

“And I said mom, ‘Why are all those kids’ – who was then called colored – ‘Why are all those colored kids in that bus?’ Because in Scranton, there weren’t any. There were very few blacks. [My mother] said they’re not allowed to go to school with us here in Delaware. So you know, and Milton wasn’t what you might call the epicenter of desegregation, and so you’ve been through a lot, but you’ve done a lot as well, and I thank you,” he said.

“Mitch, I don’t want to hurt your reputation, but we really are friends, and that is not an epiphany we’re having here at the moment. You’ve always done exactly what you’ve said. You’re a man of your word, and you’re a man of honor. Thank you for being my friend,” the president said.