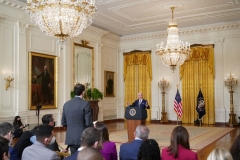 President Joe Biden answers questions during a news conference in the East Room of the White House, on January 19, 2022, in Washington, DC. (Photo by MANDEL NGAN/AFP via Getty Images)

(CNSNews.com) - President Biden said Wednesday that if Democrats’ voting rights legislation is not passed, the legitimacy of the upcoming midterm election “depends on whether or not we’re able to make the case to the American people that some of this is being set up to try to alter the outcome of the election.”

“Speaking of voting rights legislation, if this isn’t passed, do you still believe the upcoming election will be fairly conducted and its results will be legitimate?” a reporter asked.

“Well, it all depends on whether or not we’re able to make the case to the American people that some of this is being set up to try to alter the outcome of the election, and it’s one thing — look, maybe I’m just being too much of an optimist,” Biden said.

“Remember how we thought not that many people were going to show up to vote in the middle of a pandemic? We had the highest voter turnout in the history of the United States of America,” the president said.

“Well, I think if, in fact — no matter how hard they make it for minorities to vote, I think you’re going to see them willing to stand in line and — and defy the attempt to keep them from being able to vote,” he said.

“I think you’re going to see the people who they’re trying to keep from being able to show up, showing up and making the sacrifice that needs to make in order to change the law back to what it should be, and — but it’s going to be difficult. I make no bones about that. It’s going to be difficult, but we’re not there yet. We’ve not run out of options yet, and we’ll see how this moves,” Biden said.

When asked to clarify his remarks, Biden said, “I think it easily could be illegitimate.”

“I just wanted to clarify: A moment ago, you were asked whether or not you believed that we would have free and fair elections in 2022 if some of these state legislatures reformed their voting protocols. You said that it depends. Do you — do you think that they would in any way be illegitimate?” a reporter asked.

BIDEN: Oh, yeah, I think it easily could be — be illegitimate. Imagine — imagine if, in fact, Trump has succeeded in convincing Pence to not count the votes.

REPORTER: In regard to 2022, sir — the midterm elections.

BIDEN: Oh, 2022. I mean, imagine if those attempts to say that the count was not legit. ‘You have to recount it and we’re not going to count — we’re going to discard the following votes.’