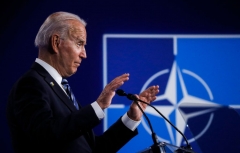 President Joe Biden speaks during a press conference after the NATO summit at the North Atlantic Treaty Organization (NATO) headquarters in Brussels, on June 14, 2021. (Photo by OLIVIER HOSLET/POOL/AFP via Getty Images)

(CNSNews.com) – President Joe Biden said Monday that Russian President Vladimir Putin is “a worthy adversary” who is “bright” and “tough,” but he refused to give details about what concessions he wants Putin to make.

During a press conference at NATO headquarters in Brussels, ABC White House Correspondent Cecelia Vega asked, “You mentioned your sit-down with Vladimir Putin and Russian aggression that came up in your conversation today. I'd like to ask you two questions on that front. Is it your sense walking into this meeting that Americans back home shouldn't expect much in terms of an outcome?

“Could you provide some specifics on what a successful meeting would look like to you? Are there specific concessions you want Putin to make? I'll give you my follow up now. You met Vladimir Putin before. What have you learned about him that informs how you approach this sit down with him and what’s your mindset walking into a meeting with a former KGB agent who you said has no soul?” Vega asked.

“I'll tell you that when it's over. I've been doing this a long time. The last thing anyone would do is negotiate in front of the world press as to how he's going to approach a critical meeting with another adversary and/or someone who could be an adversary. It's the last thing I'm going to do, but I will tell you this,” Biden said.

“I'm going to make clear to president Putin that there are areas where we can cooperate if he chooses. And if he chooses not to cooperate and acts in a way that he has in the past relative to cyber security and some other activities, then we will respond. We'll respond in kind,” the president said.

“There need not be -- we should decide where it's in our mutual interest and the interests of the world to cooperate and see if we can do that. In The areas where we don't agree, make it clear what the red lines are. I have met with him. He's bright, he's tough and I have found that he is a, as they say, when I used to play ball a worthy adversary, but the fact is I'll be happy to talk with you when it's over, not before, about what the discussion will entail,” he said.

Asked whether any world leaders he’s met with at the G7 expressed concern that his meeting with Putin is early in Biden’s presidency and will look like Biden is rewarding the Russian president, Biden said, “Every world leader here as a member of NATO that spoke today, and most of them mentioned it, thanked me for meeting with Putin now.

“So the interesting thing is, I know, and I'm not being critical of the press, I really mean this, give them my word, but generically you all thought it was Biden meeting him too soon. I haven't found a world leader who doesn't think it's just soon enough,” the president said.

“Every one that I've spoken to privately and publicly -- doesn't mean there's some out there, but it's not likely that a head of state is going to stand up in front of 29 other heads of state and say boy, I'm glad you're doing this in effect. So there's a consensus. They thanked me for being willing to talk with them about the meeting and what I was -- what I intended to do. So I haven't found any reluctance,” he said.

“There may be someone, but not in open today or in the meetings I privately had as well.

CBS Chief White House Correspondent Nancy Cordes also asked what it will mean for the U.S.-Russian relationship if Russian opposition leader Alexi Navalny were to die or be killed in prison.

Biden said that “Navalny's death would be another indication that Russia has little or no intention of abiding by basic fundamental human rights. It would be a tragedy. It would do nothing but hurt his relationships with the rest of the world in my view and with me.”