Biden: Overturning Roe v. Wade ‘Would Mean Every Other Decision Relating to the Notion of Privacy Is Thrown into Question’ 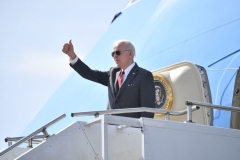 (CNSNews.com) - President Joe Biden told reporters on Tuesday that he got a call saying that the leaked initial draft of a Supreme Court opinion overruling Roe v. Wade is “a real draft, but it doesn’t represent who’s going to vote for it yet.”

As CNSNews.com previously reported, Politico says it obtained the draft opinion in Dobbs v. Jackson Women’s Health Organization, the case challenging the constitutionality of a Mississippi law banning most abortions after 15 weeks of pregnancy.

It said that, in a document labeled “Opinion of the Court,” Justice Samuel Alito wrote that “Roe was egregiously wrong from the start,” and stated, “We hold that Roe and Casey must be overruled.”

When asked what he thought of the leaked Supreme Court document, the president said, “Well, first of all, I just got a call saying that it’s been announced that it is a real draft, but it doesn’t represent who’s going to vote for it yet. I hope there are not enough votes for it. It’s the main reason why I worked so hard to keep Robert Bork off the Court. It reflects his view almost — almost word — anyway.

“Look, the idea that — it concerns me a great deal that we’re going to, after 50 years, decide a woman does not have a right to choose within the limits of the Supreme Court decision in Casey, number one, but even more equally as profound is the rationale used, and it would mean that every other decision relating to the notion of privacy is thrown into question,” he said.

“I realize this goes back a long way, but one of the debates I had with Robert Bork was whether — whether Griswold vs. Connecticut should stand as law. The state of Connecticut said that the privacy of your bedroom — you — a husband and wife or a couple could not choose to use contraception; the use of contraception was a violation of the law,” Biden said.

“If the rationale of the decision as released were to be sustained, a whole range of rights are in question — a whole range of rights, and the idea we’re letting the states make those decisions, localities make those decisions would be a fundamental shift in what we’ve done. So, it goes far beyond — in my view, if it becomes a law and if what is written is what remains, it goes far beyond the concern of whether or not there is the right to choose,” he said.

When asked whether he thinks the leak has “irreparably” changed the Supreme Court, the president said, “You know, if — if this decision holds, it’s really quite a radical decision, and, again, the underlying premise — and, again, I’ve not had a chance to thoroughly go into the report — the decision, but it basically says all the decisions related to your private life — who you marry, whether or not you decide to conceive a child or not, whether or not you can have an abortion, a range of other decisions — whether or not — how you raise your child —

“What does this do, and does this mean that in Florida they can decide they’re going to pass a law saying that same-sex marriage is not permissible, that it’s against the law in Florida? And so, there’s a whole — it’s a fundamental shift in American jurisprudence if it were to hold,” the president said.

Biden said he’s not prepared to make judgments about whether the Senate should do away with the filibuster and codify Roe.

“I’m not — I’m not prepared to make those judgments now about — but, you know, I think the codification of Roe makes a lot of sense. Look, think what Roe says. Roe says what all basic mainstream religions have historically concluded — that the right — that the existence of a human life and being is a question,” the president said.

“Is it at the moment of conception? Is it six months? Is it six weeks? Is it — is it quickening, like Aquinas argued? I mean, so the idea that we’re going to make a judgment that is going to say that no one can make the judgment to choose to abort a child based on a decision by the Supreme Court, I think, goes way overboard,” he said.

As far as what this means for the midterm election, Biden said he hasn’t “thought that through yet.”

“I mean, there are so many fundamental rights that are affected by that, and I’m not allo- — I’m not prepared to leave that to the whims and the — and the — of the public at the moment in local areas,” he said.