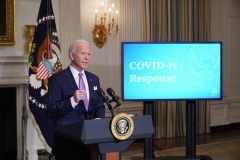 (CNSNews.com) - President Joe Biden announced on Tuesday that the administration is working on purchasing an additional 100 million doses each of vaccine from Pfizer and Moderna - a total of 200 million more altogether - which is expected to be delivered by this summer.

Biden said he has directed COVID-19 response coordinator Jeff Zients to work with HHS to increase the vaccine supply.

“We expect the 200 million doses to be delivered this summer, and some of it will come as early -- begin to come in early as summer, but by the mid summer that this vaccine will be there,” Biden said.

Biden credited everyone involved in the vaccine effort, including the prior administration, for getting the program off the ground, but he said when he arrived at the White House, he discovered the vaccine program was “in worse shape than we anticipated or expected.”

The president announced that after reviewing the current vaccine supply and manufacturing plants, they can “increase overall weekly vaccinations distribution to states, tribes, and territories from 8.6 million doses to a minimum of 10 million doses.”

“Starting next week, that’s an increase of 1.4 million doses per week. You all know that the vaccines are distributed to the states based on population,” Biden said, adding that “the smaller the state, the less vaccine, the bigger the state, the more they get.”

“So this is going to allow millions of more Americans to get vaccinated sooner than previously anticipated. We have a long way to go though,” Biden said.

The president also said that his administration is increasing transparency with states, cities, tribes and local partners when it comes to the vaccine supply. He said his administration has repeatedly heard from “Democrats and Republicans, state and local leaders” that they need to know what the orders will be in order to plan vaccinations.

“I think we're getting this coordinated in a way that there's increased cooperation and confidence. Until now, we've had to guess how much vaccine to expect for the next week. That's what the governors had to do. How much am I getting next week? This is unacceptable. Lives are at stake here,” Biden said.

“From this week forward God willing, we'll ensure that states, tribes and territories will now always have a reliable three-week forecast of the supply they'll get. They'll know three weeks ahead of time what will be there in the third week. This will help ensure leaders have greater certainty around supply so they can carry out their plans to vaccinate as many people as possible,” he said.

“So we will both increase the supply in the short term by more than 15% and give our states and local partners more certainty about when the deliveries will arrive. These two steps are going to help increase our prospects of hitting and exceeding God willing the ambitious goal of 100 million shots in 100 days,” the president added.

He also stressed his goal of 100 million doses in 100 days is just the starting point.